ANDROS Greece— (Weekly Hubris)—8/29/2011—When people ask what I like best about living in Greece, I along with many other expats and locals often answer—only partly joking—tavernas and the farmers’ markets. But there are signs that our beleaguered government does not share our fondness for these institutions.

Last year, in an attempt to stamp out tax evasion, our government forced fruit and veg vendors to buy cash registers and issue receipts from their stalls. At each visit to the weekly market, my pockets fill up with scraps of inked paper for 50 cents worth of parsley, €1.50 for a bunch of lettuces, leeks, and carrots, plus a whopping €3 for apples and pears. The farmers will pay their dues; help refill the treasury.

Meanwhile, several profitable mega-companies such as the dairy giant FAGE (think creamy Greek yogurt; http://www.fageusa.com/) have been exposed as scofflaws; they have paid neither taxes nor social security for some 20 years. Their management whines that payment would bring on bankruptcy, throwing hundreds of workers out in the street.

So, the government turns its desperation elsewhere.

Last week, the Minister of Finance announced that the Value Added Tax on bars and restaurants would jump from 13 to 23 percent. “We know,” said Evangelos Venizelos, who is also Deputy Prime Minister, “that this measure is unjust and irrational, but it’s temporarily necessary.”

When you hear our country’s second in command admit that his decisions are “unjust and irrational,” then you know there is no way out of our mess.

Already, the government’s policies have crippled the average Greek’s buying power. By cutting pensions and salaries, while increasing taxation, they have managed to close down hundreds of thousands of small businesses and shops from the center of Athens to the top tourist resorts. They have so far not closed down any of the hundreds of non-money-making agencies and services where civil servants collect their pay without lifting a finger from their cell phones or even, in the worst cases, appearing for work.

Nor have they voted to slash their own salaries, which go up every time they appear at a committee meeting!

But to take aim at our cafés, bars, and restaurants, our tavernas, is really hitting below the belt. For months now, we think twice, three times before we go out to eat, and often decide to stay home, where the food is apt to be better, and certainly cheaper. 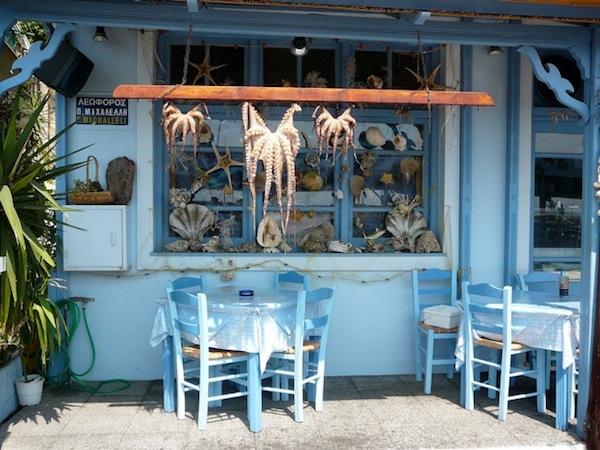 The corner Greek taverna: haven of communion and conviviality.

That said, Greeks don’t go to tavernas to eat well. They go for the fun of it, to socialize, see friends, and get out of apartments that are often too small and stuffy to permit entertaining. And our climate makes it possible to do almost everything but sleep outdoors, encouraging their gregarious nature.

In a land where there is no word for privacy and where wanting to be alone is viewed as extreme eccentricity, will Greeks meekly stay home or will they pay that whopping 23 percent every time we order a beer, a coffee, or a meal?

I predict that most of us will stop asking for a receipt. We won’t have any incentive to pay extra, and the tavernas will appreciate having no record of our custom. VAT payments will actually drop rather than help to shrink our deficit.

Already this is common policy outside of the big cities, where controls are more strict. Recent statistics disclosed that of 16 tavernas checked in Rhodes not a single one had even filed a tax declaration. Here on Andros, you will get a receipt but only if you ask for it, while one taverna near us issues them—grudgingly, on demand—but in ink so faint as to be invisible.

Last year, the government tried to control this kind of behavior by requiring every Greek family to save its receipts (which did not include travel, utilities, rent) in order to justify a certain un-taxable income. The tax offices were swamped by envelopes stuffed with bits of paper itemizing every purchase from supermarkets and shops, and disappointed that so few had been collected from the usual offenders—plumbers, electricians, and dentists.

Don’t get me wrong. I am not defending tax evasion. But until the government starts tackling the big offenders—the contractors, industrialists, bankers, ship owners, corrupt politicians of every stripe—and curbing their own expenses, we little people will do whatever we can to survive.

The sad thing is that the honest enterprises, or those that are inspected regularly, will struggle and eventually give up. Their employees, often young people, will join their already numerous peers on the dole. Their neighborhoods will darken as their lights go out. And with each one that closes, a bit of Greek vitality, joviality, and kefi (joie de vivre) will disappear with it.

Goodness knows, we have enough to be depressed about. Let us continue to eat, drink, argue, and pretend we’re merry while the noose tightens round our necks.

Hands off our tavernas!

Just so you don’t feel cheated, here’s a recipe for a summer staple found in every Greek taverna, no matter how fancy or how humble. Horiatiki Salata or Village Salad can be a very mediocre bowl of pre-cut chunks of tomatoes, cukes, peppers, and onions, drizzled with a film of bad oil, and topped with a slab of chalky feta. Or it can be divine. As always, the difference lies in the details.

A few months ago, Gastronomos magazine, the monthly food journal of the Kathimerini newspaper (http://www.ekathimerini.com/), launched an inquiry into the origins of the Village Salad. Exactly which village had invented it? The surprising answer is that it’s a 60s innovation, born in the tavernas of Plaka, the “village” in the heart of Athens. It seems that the addition of feta enabled the tavernas to charge more for it.

My Village Salad—which is something my spouse, “Joy of the People,” and I eat with relish almost every midday—consists only of the freshest vegetables I can buy. I choose them from local farmers, who sell them in the port of Gavrio from the back of their pick-ups, usually for €1 per kilo for the best, 50 cents for sauces. (No receipts, of course.)

NO cucumber—we find it makes the salad watery

A handful of capers

A handful of basil leaves, torn not chopped

Some purslane tips—these have sprouted in all our pots

Perhaps a few sprigs of kritamo (marsh samphire), a tangy succulent-like green that grows on rocks near the sea

A handful of Kalamata olives

A generous splash or two of your best extra virgin olive oil (Greek; not Italian, please!)

And, separately, either soft, creamy feta or Andros’s doppio, the island’s fresh cheese, or Cretan xinomyzithra

Serve with plenty of great bread or Cretan rusks, to soak up the “gazpacho” at the bottom of the bowl.