“You might wonder why I’m recounting these ancient myths about women. Why now? Because they matter, now. Because the subjugation of women continues to this day. Because it is time to look at the deluded, dangerous, and misogynistic origins of this behavior which persists in the false doctrines of certain religions, and because all these combined have deadly effects on women’s lives.”—Helen Noakes 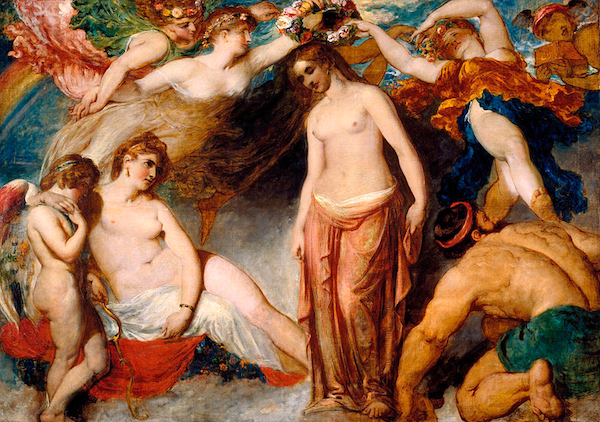 “Think about it, I said. We all had to come out of the dark to sing.”—Sarah Winman, from Tin Man

SAN FRANCISCO California—(Weekly Hubris)—1 August 2022—Hesiod describes Pandora as kalon kakon, beautiful evil. Is this reference to women as evil, written sometime between 750–650 BCE, the first such recorded calumny against the gender? Perhaps not.

The Judeo-Christian reference to Eve as the source of all evil in the world is well-known.

Indeed, the story of the pagan Pandora is similar to that of the biblical Eve in multiple ways. Both were created by all-powerful deities. In the case of Pandora, it was Zeus. Both were called “the first woman.” Both have been accused of unleashing all the evil in the world by succumbing to curiosity. Both stories, shaped by patriarchal bias, have multiple errors.

Eve was not the first woman. She was the second. The first woman, according to biblical Hebrew texts, was Lilith. She is mentioned in the Book of Isaiah, in ancient Mandaean myths, and in Jewish mythological texts dating from 500 CE onward.

Lilith, like Pandora, was fashioned from clay and created at the same time as Adam to be his equal. The latter designation seemed to be intolerable to the patriarchs who wrote the creation story, so they purged Lilith from their text, and designated her as a demonic creature, an epitome of evil, whose origins they never quite clarify.

These stalwart souls of patriarchal dominance decided to have Eve fashioned from Adam’s rib, subjected her to Adam’s control, and defined her as the weaker vessel. My question to these imaginative gents is: “If Adam was superior, why did he take a bite of the apple?” But I digress.

The falsehood evident in the story of Pandora is this. Nowhere in the original myth is Pandora given a box. Indeed, she is named Pan-dora—the all-giving, or the giver of gifts—by Zeus. Athena gives her a gown of silver and teaches her to weave. An impressive honor. Only later, the exact moment in time is unclear, is Pandora given a pithos, a jar, not a box, to carry with her when she is given as a bride to Prometheus’s brother, Epimetheus. In one version of the myth, it is Epimetheus, driven by greed, who opens the jar, and perpetrates the great transgression. Zeus was a vengeful god. It wasn’t enough for him to punish Prometheus; he saw to it that his brother, too, was reviled.

You might wonder why I’m recounting these ancient myths about women. Why now?

Because they matter, now. Because the subjugation of women continues to this day. Because it is time to look at the deluded, dangerous, and misogynistic origins of this behavior which persist in the false doctrines of certain religions, and because all these combined have deadly effects on women’s lives.

Riane Eisler, in The Chalice and the Blade: Our History, Our Future, writes: “When we look closely, not only at what Jesus taught but at how he went about disseminating his message, time and again we find that what he was preaching was the gospel of a partnership society. He rejected the dogma that high-ranking men—in Jesus’s day, priests, nobles, rich men, and kings—are the favorites of God. He mingled freely with women, thus openly rejecting the male-supremacist norms of his time. And in sharp contrast to the views of later Christian sages, who actually debated whether woman has an immortal soul, Jesus did not preach the ultimate dominator message: that women are spiritually inferior to men.” All we need to do is read the New Testament to confirm these facts.

From certain organized religions’ considering women unclean during their menstrual cycles (or immediately after giving birth), to lyrics like those in a ridiculous Elvis Presley song, Adam and Evil: “I’m lonely like Adam and evil like Eve,” women have been condemned for simply being. It is an evil that women have had to endure for centuries.

It seems to me that until and unless a society stops perceiving one gender as superior to another, (and I include all gender identifications as well as those who refuse labels), it cannot claim to be civilized.