Posted by Elizabeth Boleman-Herring on March 5, 2016 |

“In the lead-up to the 2016 presidential election, the Republican Party has been hijacked by a demagogue. Along with everyone else in the twittering class, I’ve waited several months too long to make this pronouncement, but the worst has indeed come to pass—again—in America.”—Elizabeth Boleman-Herring 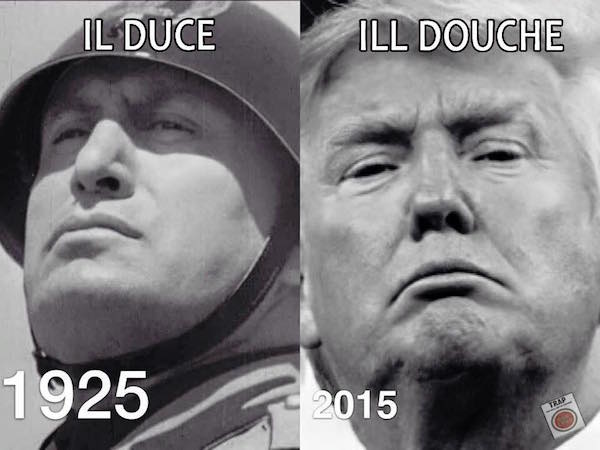 Demagogues past and present.

PETIT TRIANON Florida—(Weekly Hubris)—3/7/2016—In the lead-up to the 2016 presidential election, the Republican Party has been hijacked by a demagogue.

Along with everyone else in the twittering class, I’ve waited several months too long to make this pronouncement, but the worst has indeed come to pass—again—in America.

I imagined that, in my lifetime, two terms (the second, albeit, stolen, courtesy the Supreme Court and Florida) of one demagogue, George W. Bush, would suffice for the Great American Unwashed. But, apparently, the Low Information Crowd, the Poorly Educated, haven’t yet got this madness out of their systems. So, here we go again.

A late (in August) prosecution of Trump for RICO violations (for bilking “students” at  “Trump University”) may yet slow the orange-haired juggernaut, but it’s going to be a Herculean task stopping him: Hillary should order a hazmat suit now.

We shouldn’t be surprised at Trump’s rise, though. A party hell-bent, over the past 20-odd years, on conning the American people out of the vote (by gerrymandering and voting rights infringement), and recently ascendant in the House and Senate due to the shady, back-room efforts of the ultra-right, .001-percent, wackadoodle donor class (the Koch brothers, et al), was ripe for a hostile, lunatic fringe buy-out . . . but I guess I just hoped voters would have more sense. Apparently, some 30 percent of us do not.

In his book, Demagogue: The Fight to Save Democracy from Its Worst Enemies, liberal advocate and Mayor of Charlottesville VA Michael Signer cites James Fennimore Cooper’s four-point definition of a demagogue: “1) They fashion themselves as a man or woman of the common people, as opposed to the elites; 2) their politics depends on a powerful, visceral connection with the people that dramatically transcends ordinary political popularity; 3) they manipulate this connection, and the raging popularity it affords, for their own benefit and ambition; and 4) they threaten or outright break established rules of conduct, institutions, and even the law. Either way, they are intrinsically violent.”

Trump in a classical Greek nutshell.

And, yes, and I fear we, and long-suffering Hillary, are going to be stuck with taking out the reeking garbage come November: Lord knows the Republicans aren’t up to the task. They’ve still got Cruz and Rubio on board.

In the event there are still some of you, particularly in Western Europe, who are responding to Trump’s candidacy (and probable nomination) in disbelief, it may come as some comfort to know that the fascist strain in US politics has been there since the git-go: “W” wasn’t our first demagogue, nor will he be the last.

In fact, democracies, and republics, such as ours, are prone to this infection, which Signer likens, very aptly, to a retrovirus.

He writes, “Democracy suffers from an intrinsic paradox—left to its own devices, freedom, humanity’s ultimate ambition, can degenerate into its opposite: tyranny. It is as if humanity is somehow bent on suicide or even matricide, where the demagogue attacks the very system that gave him birth.”

Suicide. Matricide. Precisely what’s driving Global Warming and our refusal even to acknowledge it, let alone rise to its occasion.

The Greek historian Polybius (c. 200—c. 118 BC), held that all democracies are inevitably undone by demagogues; that every democracy eventually decays into “a government of violence and the strong hand,” leading to “tumultuous assemblies, massacres, banishments.”

Well, America is not a democracy, but our sort of republic may be close enough for government work. And we certainly now have tumultuous assemblies, massacres (in the form of school and workplace shootings, as well as violence against the poor, the disenfranchised, and voters of color). Yet to come? A wall named Trump? The “banishment” of all Muslims? Bread and circuses? The death of all federal regulation of anything that might check the greed of such present-tense, this-generation-only robber barons?

As the cultural pendulum swings, I look back at the reasonable, high-toned, in some ways gormless presidency of that elegant and beautifully educated former senator from Illinois, Barack Obama, and think . . . in America, I really should have seen Trump coming.

As a people, we just cannot do reason, high-toned-ness, adult-in-the-room governance for long before our Real Housewives, reality TV, Jerry Springer inner child claws its way out of the body politic.

Still I, for one, hope there’s still time enough, and moral will, to put Alien V back in the box where he belongs.

Note: The image of Mussolini and Trump derives from http://jeffwinbush.com/2015/12/08/donald-trump-american-mussolini/

1) Wikipedia entry on the meaning of the word “demagogue”: https://en.wikipedia.org/wiki/Demagogue

2) “Demagogue: The Fight to Save Democracy from Its Worst Enemies,” by Michael Signer

3) “Here’s what demagogues like Trump do to their countries when they take power: The Donald has all the traits of his political forebears, and he’ll present all the same dangers,” by Michael Signer, “The Washington Post,” 2/29/2016, https://www.washingtonpost.com/posteverything/wp/2016/02/29/heres-what-demagogues-like-trump-do-to-their-countries-when-they-take-power/

5) “Of Demagogues and of Constitutionalism, an examination of Michael Signer’s book,” by teacherken, DailyKos.com