The Poetry of Mary Barbara Moore 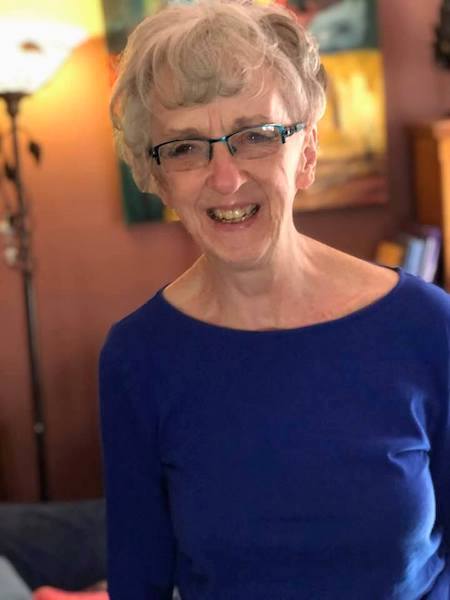 GREENVILLE South Carolina—(Weekly Hubris)—1 December 2020—Mary B. Moore’s newest collection, Dear If, is due out from Orison Books in late 2021.  She has published two other full-length poetry collections and several chapbooks, including Amanda and the Man Soul (Emrys Chapbook Prize, 2017), Flicker (Dogfish Head Poetry Book Prize, 2016), Eating the Light (Sable Books Chapbook Contest Winner, 2016), and The Book Of Snow (Cleveland State University Press, 1997). She has also received several awards for poems in Terrain, Nelle, Nimrod, and Asheville Poetry Review. Recent work also appears in Poetry, The Gettysburg Review, Prairie Schooner, 32 Poems, The Georgia Review, The Birmingham Poetry Review, The Nasty Women Poets Anthology, and Fire & Rain-Ecopoetry of California, and others.  Moore, a native Californian and now a West Virginian, lives in Huntington WV with her husband, the philosopher John Vielkind, and the cat, Seamus Heaney. (Her only slightly outdated website is marybmoorepoetry.com.)

or are they crows, say ha, ha—
not the British ditch with fence, famous,

to Scrabblers—but small horn notes, terse
and hoarse. A sheep’s bleat, a handsaw,

the finches who chime in
on the apple tree–moss-furred

solos in the swath of optimist
dandelions–nothing haunts

They border the pine voles’ holes
and the wild hemlock, whose parsley look

emblems the book of “Seem.”
Purple-stemmed, a four-petalled white flower

draws a fat bee, a troth if not a promise.
Its leaves, toothed arrowheads air browses,

Their only fence was the raven’s
haand ha. An lol or bravado’s call?

in the Englished book of Job.
The ravens circle and caw.

Even earth can seesaw
when the fault slides right:

Wings pinned open to pose
the lie of flying,
they out-blue sky.

But that’s disguise:
pigmentless, refraction
is their hue, cells

attuned to blue.  And see,
they’re perfectly preserved,
soul symbols, a pair of them,

in formaldehyde’s acrid,
soul-colored fluid,
or box them in a vacuum,

like these.  They prove Camus
was right: death alone halts
metamorphosis.

The Morphos’ pose,
perfect for blue’s boast,
hides the underwings’

Imagine, lying face-up
on the ordinary evening
lawn, as flocks of Morphos

migrate over, the sky’s
blue not quite
disguising the celestial

ocelli flashing, as if sky
were million eyed.

Werner’s blackish gray
appears fully fledged on “Back of nuthatch”:
I hope he didn’t kill to still and catch it.
I name it “Dad’s gabardine.” It matches
his felt hat, dimple-domed and later sold,
a dollar ten for dolor, funereal
gray, worth less than “old stems of hawthorne”
found trail-side. The mineral parallel, slate.
Our Four Pole Creek stacks it, shaling plates
or books or pages too obdurate
for prose. Our slate’s Werner’s “Greenish gray”;
his local parallel is “clay slate, Wake.”
I see California’s eucalyptus, milk-
green scimitars, or the haze-mulled
blue-gray-green that grazes
West Virginia’s wooded evening ridges.

Maybe the colors in Werner’s millionth
reprint are only half awake.
I skim past the grays and look
to purples to catch my father’s hair,
“Bluish lilac purple,” though the Nomenclature
slacks on dazzle. Still I admire
Werner’s eccentric project, his making families
of color: winged, nerved, finned and rooted.

Maybe he believed that seeing well
adds being to our brief
reservoir, our breviary.
Not that sight is prayer, or memory
faith. Maybe attention is:
a long look at silver maple leaves’ downy
undersides, blue silver like snow-fox,
but duller, animates the downside.
Add a shade or two, it mimics
creek’s and gravel’s gabble, or an old
man’s dazzled hatless shadow, its hold
on two dimensions.  The mineral
look-alike, flint, can spark
vermillion, coral, cinnabar.

“On My Mother’s Suicide”
By Mary Barbara Moore

Haint of talk and sulk, saint
of don’t and won’t:
you never quite forgot,
never forfeited
worry, the gnaw you owned.

You died of null and none.
Hip bone broken,
woman bowl broken,
you honed appetite,
to none, burrowed
into nowhere’s nothing bed.

Now you walk at night,
naught in a white gown,
dark hair a burl of worry,
pale hands wringing, fingers
ringed for vow and vowel, Oh
for zero, O for no.

I hold your ashes,
silk and grit, shadow
of wish and flesh,
and still I jilt you,
who taught me not
too well:

And will I nil I
follow you,
naught, hunger without
a home?

Goner, you got me in the end,
your sea-teal eyes,
your worry dice,
the swollen knuckle bones.
I wear your musk,
your never quite,
your mull and nix.

Augustine read God from nature’s book
which bulges Maxwell-Parish blue through
my window.  It’s bled up from the horizon
just before dark, back-lit. Walnut’s black-green
fronds arc loosely, leaves arranged like tines
or teeth, and seem to brocade the blue, press
it up, until nightfall flattens it all, a breast
X-ray’s negative with moon, calcium-starred.
Or is that look cataracts’ post card?
“Farewell, poor vision. The Mediterranean
sends you blue.” Dear neon ink without letters, tails,
serifs; dear toothy fronds, grins without a head
or body–Oh look, read almost reverses dear–
dear gaudy blue, dear if and rift, dear void.

3 Responses to The Poetry of Mary Barbara Moore