“Here is what the men, women and children in the town were thinking behind their smiles: ‘Wave, you old fool! Good. Now touch your fingers to the bill of your cap and give us a nice salute. Listen, you blockhead. Order your driver to stop so you can accept the bouquet from the little girl. Would it kill you to smile? Pay attention now, oaf.’”—Burt Kempner 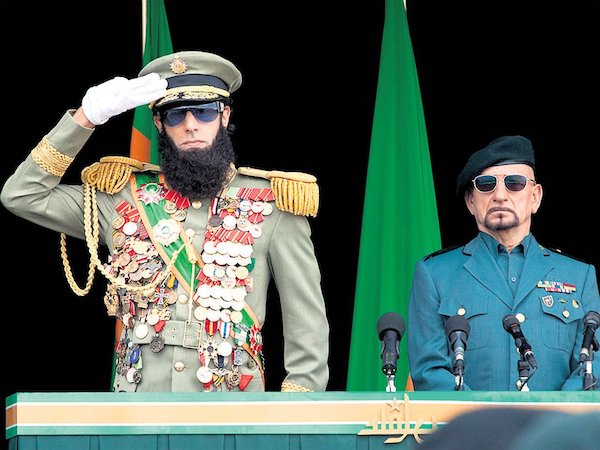 Sacha Baron Cohen and Ben Kingsley, in “The Dictator.”

GAINESVILLE Florida—(Weekly Hubris)—March 2019—A few years ago, I began wondering what would happen if a dictator could be secretly controlled by the people he ruled over and despised. How cool would that be? So, I decided to have some fun with the idea, and this was the result:

The President for Life stood up as his motorcade made its way through the main street of the town. The townspeople lined either side of the street, cheering, holding up their children and waving their hats. It was his first visit here. He’d heard strange, unsettling things about the place, but it appeared no different from the other stops he’d made on his tour. Here, as everywhere, his people loved him, even if he often had occasion to be a stern father with them. He was content. He shouldn’t have been.

Here is what the men, women and children in the town were thinking behind their smiles: “Wave, you old fool! Good. Now touch your fingers to the bill of your cap and give us a nice salute. Listen, you blockhead. Order your driver to stop so you can accept the bouquet from the little girl. Would it kill you to smile? Pay attention now, oaf. The Generalissimo is plotting a coup against you. You must act quickly and decisively. Tomorrow morning, instruct your Special Guard to take care of the problem. Tomorrow morning at nine, understand? Now drive on, you steaming pile of manure.”

The Vice-President for Life preferred to remain seated in the back seat of his car. He waved to the crowd, but he looked as though he was drying his manicure rather than conveying affection. He was a good actor, he told himself. He prayed that the dust of the road wouldn’t soil his white suit and that none of these people would want to shake his hand. He gave them the smile he’d spent hours in front of his mirror cultivating.

This is what the crowd beamed at him as one: “Your hour of deliverance is at hand, you cold fish. The President suspects nothing, but the idiot won’t remain in the dark forever. You must strike swiftly. Tomorrow morning at nine, send two of your best men to the old man’s private chapel at the palace. He pretends to pray but he actually just naps. You cannot squander this opportunity, you cowardly fop!”

As was his custom, the Generalissimo brought up the rear of the procession on horseback. He sat his horse ramrod straight and gave only the slightest of nods. He had no illusion that he was loved.

The concentrated thoughts of the town’s citizens washed over him: “What a sight this is! We’ve never before seen a peacock with horns. You did know that the Vice-President has been sleeping with your wife, didn’t you? You drill the troops and he drills your woman. Is there a man behind all those medals? Does your sacred honor mean nothing to you? He arrives at your wife’s bedchambers every morning at precisely nine o’clock. But tomorrow, when he rolls back the covers, he will not find the woman who inflames him, but your aide-de-camp, armed with a pistol. Can you imagine the look on his face? Ride on, old cuckold. You have work to do.”

The motorcade departed from the town. The music died off and the dust settled back on the main street. The happy townspeople made their way back to their homes. They would spend much of tomorrow locked indoors but, that night, there would be much feasting and telling of tales, both bawdy and heroic.