“I remember our first olive crop. It must have been about ten years ago. We’d been so excited, stripping the fruit from our Kalamata and Amphissa trees. We filled several shopping bags and took them up to the press in Ano Gavrio, above the port. Our corner of Andros has two presses, one an EU-approved, spic-and-span high-tech operation, and the other in a funky old-fashioned barn. You need a thousand kilos of olives to go to the modern press; we must have had about ten.”—Diana Farr Louis 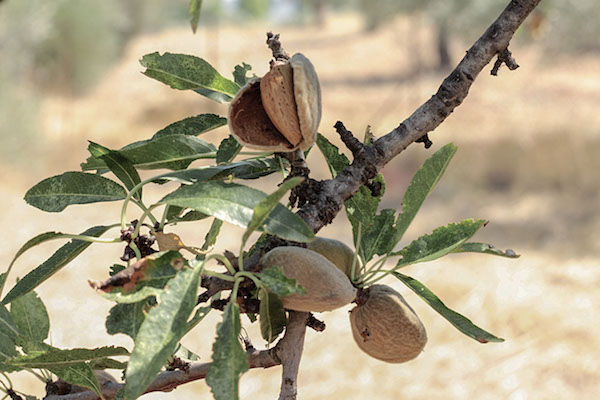 ANDROS, Greece—(Weekly Hubris)—(First Published on October 11, 2010)—A month ago I received an e-mail from a friend: “I’ve been trying to call you. Never any answer. You’re probably out picking something.”

Her complaint sums up the past four months on Andros. There has always been something to pick. Right now, it’s almonds. My spouse, “Joy of the People,” has been collecting them for several weeks. We only have two producing trees (and about five of their “children”) but, like the plums earlier, they’ve gone into overdrive.

Yesterday, I decided to help finish this business. We took the step ladder and I plucked the straw-colored nuts off the branches I could reach, striking at the higher ones with a shepherd’s crook from Epirus. The trouble with that technique is that all the almonds scatter amidst stubble the same shade as they are, and mingle with the litter of empty grey outer shells discarded during previous efforts. Chances are we missed a few.

Actually, I’d been on my way to pick olives when the almond trees beckoned. We have about 30 trees, some of which we planted before we built the house, just over 20 years ago. The older trees bear Kalamata and Amphissa olives—the shiny black tear-drop variety, and the large round ones, which can be eaten either green or black.

The Amphissa trees are disappointing this year; the few olives still on their branches are bruised and misshapen. A horrible minute fly, called the “dakos” in Greek, lays its eggs in the fruit and they hatch into repulsive white wiggly millimeter-long worms that destroy the olive. The Kalamata trees are plagued with dakos also, but a couple of them have managed to produce some pretty fat, flawless fruit.

I pick them one by one, polishing the dark satiny skin with my fingers in search of the telltale pinprick that means it’s inhabited. Some are obviously blemished, and the ground beneath the trees is spattered with windfalls. 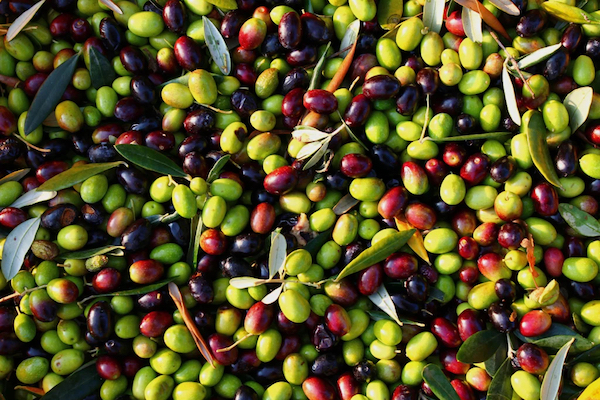 Our trees don’t obey the rules. The olives shouldn’t be ripe for another month. That’s when the oil press opens and so I can only hope some will hang on until then. Especially the tiny Lianolia olives that, surprisingly, contain far more oil than their plump counterparts.

I remember our first olive crop. It must have been about ten years ago. We’d been so excited, stripping the fruit from our Kalamata and Amphissa trees. We filled several shopping bags and took them up to the press in Ano Gavrio, above the port.

Our corner of Andros has two presses, one an EU-approved, spic-and-span high-tech operation, and the other in a funky old-fashioned barn. You need a thousand kilos of olives to go to the modern press; we must have had about ten.

Yorgos, the owner, a kind-faced member of Gavrio’s extended Mamais clan, smiled when he saw our load that October morning. It must have been the smallest on record. But business was slow that day and he decided to humor us. First things first, though. He invited us into his kitchen and poured us two shot glasses of tsipouro (think grappa) for us and one for himself. Then he and “Joy” entered into an intricate analysis of the current political situation while I talked to his ancient but witty mother, who offered us some of her homemade creamy cheese.

It must have been about an hour later before we made the move across the road to the oil press. Unlike the house, the building was dark and grimy. A thick layer of grunge, from countless years of handling and pressing olives, covered every surface. As Yorgos weighed the olives and put them in the washer, a cow poked her head in and several chickens clucked and scratched in the dirt. Flies bombarded us, alighting on the scales, olive bags, equipment, everywhere. I wondered whether the floor had ever been swept.

After a while, I ignored it. Perhaps all those layers of oil act as a shield, keeping germs at bay—just as when babies are anointed with it in an Orthodox baptism, they say the Holy Unction wards off the Devil.

The press itself stood at the back of the room, a giant corkscrew that swiveled down onto some 20 round woven rope mats, where Yorgos spread the olives after putting them through a crusher.

As he worked, he gave us a lesson in olives. “You know, of course, you won’t get much oil from these,” he frowned, shaking his head.  “They’re not for oil; they’re for eating.”

“But,” said I, “surely they must have some oil. They’re so fat and juicy.”

“You’ll see. And they’re all black, a bit too ripe. The little ones are much more productive. Plus some seem to have dakos, too. Never mind. Those damn flies plague all our trees.”

Despite the warnings, we watched eagerly as our oil trickled out of the pipe. It was golden, not the more desirable green that comes from a mix of ripe and unripe olives. And it filled one plastic water bottle. We got all of 1 ½ liters, hardly enough for a week’s cooking, but it was ours. And we loved it.

Yorgos didn’t even charge us for the trouble.

Since then, we’ve been back several times to Yorgos’s press. It has been cleaned up, slightly, since that first visit. And our olives have been more bountiful, slightly. The welcome is always as warm, lubricated with tsipouro and politics, even on days when there’s a line of pick-ups waiting.

He’s a reminder that some of the rewards of picking are social not solitary. And that goodliness if not godliness has nothing to do with cleanliness.