“Although Dad and I were the only ones left in our big house on Long Island, we had plenty of people to look after us. One was Marie, the cook from Alsace. Another was Mrs. Colmar, who came to do the laundry and ironing. Sometimes, there was a governess; sometimes, not. Of all the cooks, maids, and nannies who came and went in the four years after my mother died, I remember not a single name except these two: Mrs. Colmar, because she was a constant; Marie, because her cooking changed my life.”—Diana Farr Louis 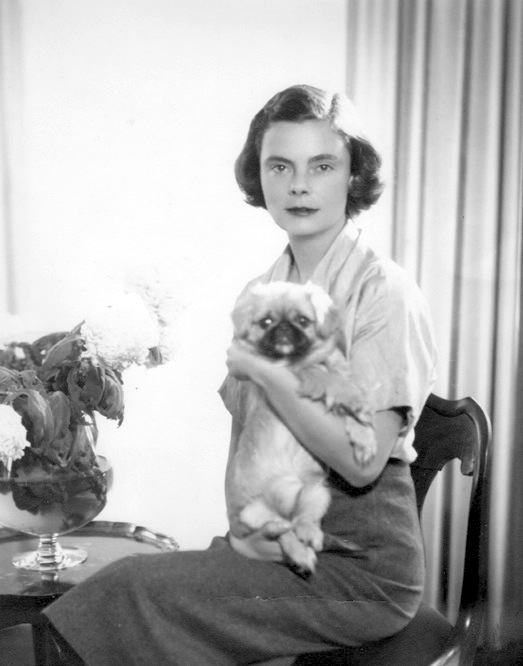 ATHENS, Greece—(Weekly Hubris)—(First Published on January 31, 2010)—I fell in love for the first time at the age of eight. With a woman. Luckily, my father loved her, too. That fall, he began to go out at night. Every evening, he would leave the house right after dinner. He never stayed for dessert, but would give me a kiss and tell me to be a good girl.

It was not like my father to go without dessert. He whose favorite maxim was, “A bit of sweet makes the meal complete.” For a week or so, I’d go straight to my room with a Hershey bar and read myself to sleep. But one evening, I noticed him carrying a plate wrapped in a linen napkin as he went out the door.

“Where are you going, Daddy?” I asked. “And what’s that you’re carrying?”

After this happened a second and a third time, I decided to plant myself in the kitchen before supper. I had to see what Marie was up to.

Although Dad and I were the only ones left in our big house on Long Island, we had plenty of people to look after us. One was Marie, the cook from Alsace. Another was Mrs. Colmar, who came to do the laundry and ironing. Sometimes, there was a governess; sometimes, not. Of all the cooks, maids, and nannies who came and went in the four years after my mother died, I remember not a single name except these two: Mrs. Colmar, because she was a constant; Marie, because her cooking changed my life.

We were lonely in those days, Dad and I. He had his office, I had school, but the nest was empty. My oldest brother came back from the war and headed straight for Wyoming, never to return except for a few days here and there. My sister had married. My second brother was off at boarding school. My father slept with a green blanket rolled alongside him, to make his huge mahogany bed cozier.

He had gone courting before. He’d even taken out my second grade teacher, a Miss Conti who, despite the name, came from Finland and had purple gums. There was Debbie, a widow, herself, but cold and strict, while Aunt Babs, my godmother, seemed clingier than she should have been. None of these women came even close to replacing my mother.

I was barely four when she died of liver cancer at the age of 42. I have no memories of her being well, of even being anywhere but in that huge bed. In the unconscious way of tiny children, I used to run in and out of her room to get at the candy bowl. That I remember distinctly. It was a swirl of ultramarine and white porcelain laced with gold threads. It had a knob on its lid and it stood on top of a narrow piece of furniture with six drawers that was painted sunflower yellow and decorated with little people in pointed hats. The fragile chest was one of many Chinese souvenirs Mother’s missionary father had brought back from the Far East. I had to climb onto the chaise longue next to it to reach the candies, multicolored sour balls.

If my mother had been well, I’m sure she would have stopped me. But she’d just smile and call me her little sprite.

When I went into the kitchen that afternoon in the fall of 1948, I scared Marie out of her wits. She’d been so intent on her cooking she hadn’t heard my slippered feet.

“Don’t evair come up on me like zat again,” she gasped after she caught her breath. “My heart stopped beating.”

I apologized and peered into the pan she was shaking on our big stove. I’d give anything to have one like it now. With a large oven under the six burners and smaller ovens, a grill, and plate-warming spaces on the left side, it took up most of the kitchen wall.

“What are you making, Marie?” I asked.

“Oooh, eet ees someting for your papa.” Her round face lit up under its short dark curls. She was very round and not that much taller than I—definitely not an untrustworthy, skinny cook. “Eet ees a leetle sauce for some crêpes, crêpes Suzette—pancakes—that your papa will take to a new lady friend.”

“Pancakes! Can I have one?”

Marie gave me a piece of limp dough that was much, much thinner than our breakfast pancakes. It didn’t make much of an impression.

“But zese are noting wheezout zee sauce,” she said, “and I can’t give zat to you, not good for tsildren. Zere ees alcohol, liqueur, in eet.”

When my father got home that night, I asked him about the new lady friend. Rather vaguely, he said she was a newcomer to Cedarhurst, a woman with two small children, and she needed to meet people. But she had to stay home with her son and daughter, so he’d decided to keep her company.

Then I remembered that I’d already met the two kids, told to look after them on the school bus, but they’d slipped right out of my mind.

It can’t have been too long after that evening that my father brought the new lady friend home to meet me.

I’d been sitting by the fire in the living room, reading a book as usual, with the glass doors to the outer living room and hall shut to keep in the warmth. My father opened the door and she stood there. Neither of us moved for a long, long moment.

She was small and slim, five-foot-two, eyes of brown, with brows that met in the middle and a widow’s peak, dark shoulder-length hair, a turned-up nose. She smiled, a warm smile with laughter in it that coaxed a smile out of me. I got to my feet and grinned.

Later, she told me that I’d broken her heart. “You looked like an angel. You had yellow hair but teeth to match. I knew I had to marry your father and save you.”

They were married on a snowy December 27th in New York. I needed no time to get used to the idea. I was smitten. Head over heels, totally enamored. And my new mother did save me. She started by coaxing me, slowly, slowly, to brush my teeth. None of those nameless nannies, maids, or cooks had ever bothered to teach me that most basic habit.

And I will always be grateful to dear Marie for inserting an irresistible love potion into those crêpes Suzette.

My new mother hated to cook, but she did love to eat. 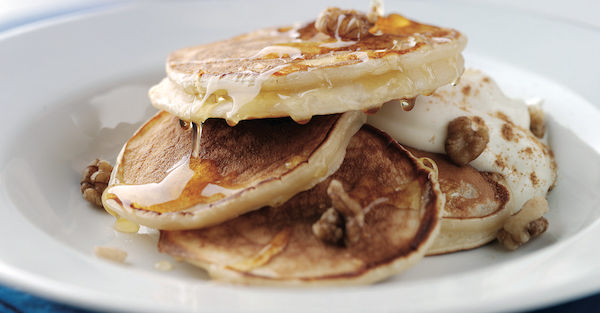 I cannot replicate Marie’s recipe and I’m not going to try. It must have been quite a feat to keep them perfect, drenched as they were in intoxicating sauce, instead of their being flipped in it at the last minute. I suggest you resort to Google or pick up your old Mastering the Art of French Cooking.

But I don’t want you to feel cheated, so here’s a recipe for Greek pancakes (tiganites) with orange juice from the island of Crete (from my Cretan cookbook). They are a lot easier to throw together, and you could sprinkle them with a little Cointreau or Grand Marnier for that Gallic touch.

In years past, these pancakes were a must on St. Andrew’s day (November 30th), when it was said that the kallikantzari (the Greek equivalent of hobgoblins) would steal your frying pans or poke holes in them if you didn’t put them to use. Children would bang the pans like drums the night before, pretending they were the evil spirits.

In a medium-sized bowl, mix the spices, orange peel, raisins, salt, and olive oil with the orange juice. Gradually stir in the flour until you have a thickish batter (these are not crêpes!). If the batter is too thick, add a little water. Let rest for 1 hour or more to let the flavors mingle.

Heat a few tablespoons of oil in a frying pan and drop in as many tablespoons of the batter as will fit comfortably without touching. Flip them over when you see bubbles forming on the surface. Drain the pancakes on paper towels and serve them, with a little sugar or honey, and sprinkled with chopped walnuts if desired. Makes 24 small pancakes.