“Does your life feel like a microcosm of what’s going on in the greater world? That everything that could go wrong is going wrong? Nothing as dramatic or appalling as being targeted by missiles fired from the Black Sea, but sliding or lurching out of control? I admit that mishaps can become magnified as one gets older; that something you would brush off as a trivial annoyance can feel like a mini-catastrophe when you’ve entered your ninth or even tenth decade, but sometimes it does look as though we’re not the only things that are crumbling.” —Diana Farr Louis 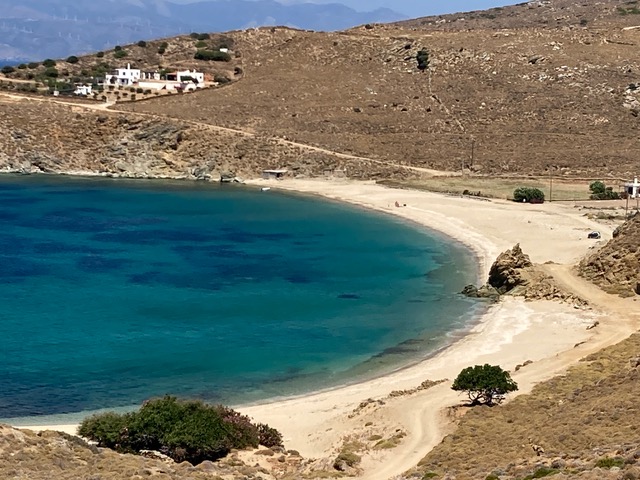 What I was hoping for this July.

ANDROS Greece—(Weekly Hubris)—1 August 2022—Does your life feel like a microcosm of what’s going on in the greater world? That everything that could go wrong is going wrong? Nothing as dramatic or appalling as being targeted by missiles fired from the Black Sea, but sliding or lurching out of control?

I admit that mishaps can become magnified as one gets older; that something you would brush off as a trivial annoyance can feel like a mini-catastrophe when you’ve entered your ninth or even tenth decade, but sometimes it does look as though we’re not the only things that are crumbling.

For one thing, a major part of our social life comprises . . . funerals. We don’t go to parties anymore. I don’t even know if people throw them, except for weddings, and we’re not invited to those. Our friends’ children have already done that (or not). And we probably wouldn’t be up to dancing till dawn in any case.

Now, having survived three winters of pandemic without, touch wood, even catching a sniffle, but rarely meeting people indoors and never shopping without a mask, we thought we’d feel the usual liberation once we got to our house in the outer outback of Andros. Greeted by perfect conditions at Easter, we believed we would just unpack, dust a little, roll up the rugs, relax, and enjoy the summer.

‘Twas not to be. Even before we arrived, we knew something was probably amiss with our water supply. Friends who’d gone to water our long-suffering lemon tree discovered the tanks had run dry. We asked Angelos, our bountiful homme à tout faire, to take a look while he was slashing our ever-prolific thistles. He filled the tanks, but the thought kept niggling at us that something had gone seriously amiss.

Despite water levels decreasing far faster than they should, it took a week before we discovered the mini-fountain spurting away behind the storeroom-cum-outdoor-loo. Our plumber, who has long retired but who does occasional favors in emergencies, came to the rescue. But the very next day, our indoor toilet refused to flush. We bought a replacement tank, which didn’t fit, but the ever-resourceful Angelos employed some wizardry to get the old one functioning once more.

Two days later, the front door had a tantrum and refused to budge from its half-open position. Naturally, this happened on a Sunday. Our helpful neighbor, an electrical engineer who has a special way with doors, rushed over, assessed the situation, and managed to coax it back into position with a few judicious screws and magic. Pourvu que ça dure.

The week of July’s not-so-glorious Fourth was less fraught and we did start to relax. But then the wind started.

Andros is famous for being one of the windiest islands in Greece, but the white caps known as provatakia and alogakia, little sheep and horses, do not usually gallop across a hazy Aegean until August. Some days, it blew too fiercely to swim and the previously “just-right” water temperature turned frigid. We couldn’t sit outside in the evening but, rather, huddled indoors with sweaters and were pleased we’d been too lazy to take up the flokati (our shaggy woolen rug). Sometimes, we even looked longingly at the fireplace. 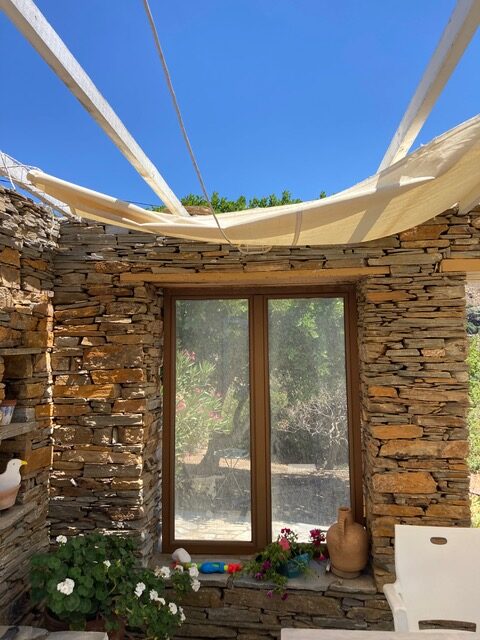 Pergola damaged by the wind.

That weekend, it rained, heavily and beautifully, two nights in a row, soaking the parched trees that had not had a drink since sometime in March. But then the wind started up again, with renewed vengeance, this time splitting the canvas awning over our pergola that Angelos had so painstakingly put up just two weeks before. First one panel, then another, until finally the only panels left were the two Angelos had ingeniously stitched together with the needle and twine we use to sew up the Easter lamb.

By now I was resigned to not swimming and since it’s an ill wind that blows no good, I was happy not to feel tempted. A cat that has been visiting for years, irritatingly entangling herself in my feet and threatening to trip me up, had suddenly turned on me and cut a four-inch, deep slash just above my ankle. She may have felt squeezed between me and a flowerpot, who knows? But she will never get another tidbit or even something headed for the garbage. Of course, this happened on a Sunday and the local pharmacist refused to give us any antibiotics without a prescription. So, very bloody and somewhat bowed, irrigated with Betadine, and well-bandaged, I carried on with our circumscribed life. 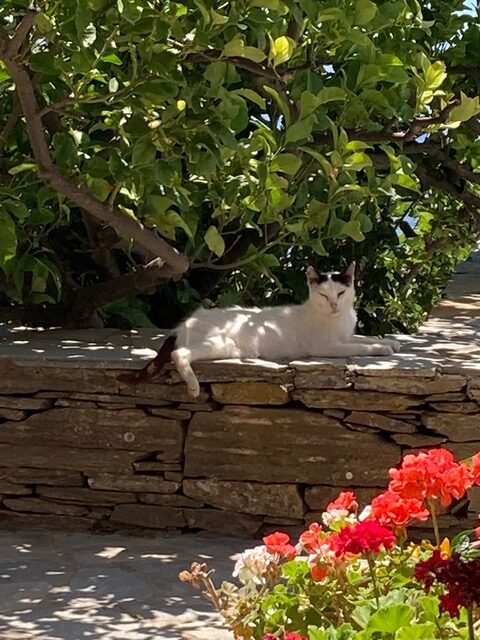 My nemesis, Black Ears, showing no remorse and still hoping for a handout.

We used the time resourcefully, doing jobs that take longer to make up your mind to tackle than actually to carry out. In other words, we emptied the two storerooms, discovering a host of useless objects, rusty tools, and things with unknown uses. We put the useful things back in carefully and this paid off when the wind rose up again and tore all the panels off the awning except for the one newly sewn. To add insult to injury, the dangling bits of awning collapsed when a beam broke in the night, unable to withstand the constant buffeting. Two days later, our savior Angelos arrived with some wood salvaged from another job and devoted six hours to stitching the panels and fashioning a new beam (none of our would-be beams was quite long enough to span the area). All sorts of screws, nuts, bolts, nails, wrenches, hammers, etc. were called for and, even when I didn’t know their names in Greek, I was able to produce them instantly. A week ago, we would have had to rummage through hopelessly messy shelves. 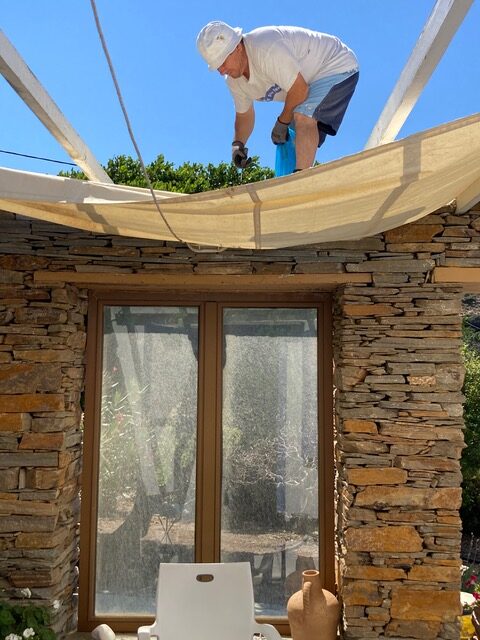 Repairing a pergola is a dangerous job.

Taking a deep sigh of relief, we treated ourselves to a day off at a remote beach with a taverna whose view is much better than its food, but we were desperate for a change of scene. Two days later, water started streaming from the newly repaired pipe. Again, though, the ill wind proved lucky. Unable to do a paint job, Angelos asked if he could come clear the remaining thistles. Towards the end of the morning, he happened to notice a large patch of damp earth near the newly repaired water pipe. He said he would need a papagallo (literally, a parrot) to open the join, which I interpreted as monkey wrench, and with a lot of huffing and puffing, he managed to open it, cut off the split end, and stuff it back in again, leaving us with the warning: “Keep an eye on that pipe. Rubber perishes after 20 years . . . .”

As I finish this paragraph, my nearest and dearest has flicked on the TV, but instead of the latest on Ukraine, COVID cases, or Erdogan’s claims to Crete, the screen shows alarming red and gray scenes of high flames and dense smoke covering Mt. Penteli and making their way south to the Athenian suburbs. Since then, after a near sleepless night, I keep referring to live updates while huddled in the living room with only one window open as it is still so cold and windy.

So with a Monty Python song churning over in my brain—“Always look on the bright side of life!”—I think back on the good things of the past month: special lunches and evenings with old cherished friends from Oxford and with newer cherished friends from Derry and Granada; the help given by Angelos, who always brings along gifts—of apricots, pears, and grapes from his or absent clients’ gardens—and ingenious solutions accompanied by a smile; the promise of good harvests later, of figs, almonds, pomegranates, apples, quinces, and olives; some lovely shopkeepers in Gavrio, always ready with a smile and a warm greeting; our continued ability to (sort of) cope with this remote and unruly property, together; and, ah yes, the absence of mosquitoes.

That ill wind does bring some good. Will it rouse the politicians and the industries that fuel our climate crisis before it’s too late? 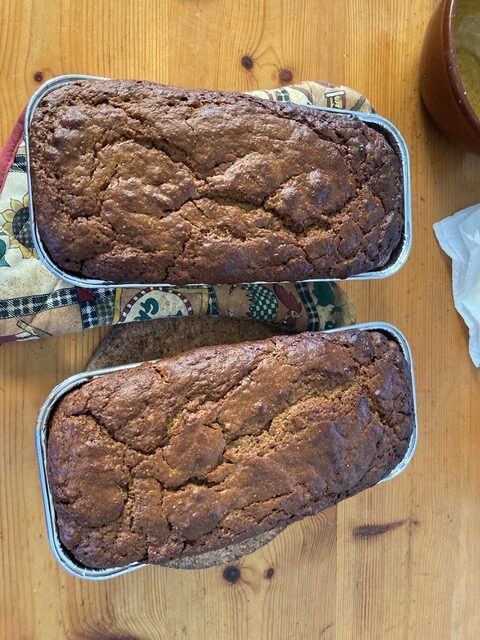 With fig season upon us, in Greece at least, here is an easy, very satisfying recipe for when you have too many to devour, or when you only have access to store-bought fruit. With thanks to G, whose recipe I have tweaked.

Preheat oven to 180ºC/350ºF. Beat eggs, add sugar, and beat well. Add the mashed figs, oil, and ginger. Sift the flour with the soda and baking powder. Add the fig mixture to the flour, along with the kefir/buttermilk, alternately, stirring well. Fold in the nuts and pour the batter into two loaf pans. Bake for about an hour or until a sharp knife comes out clean. 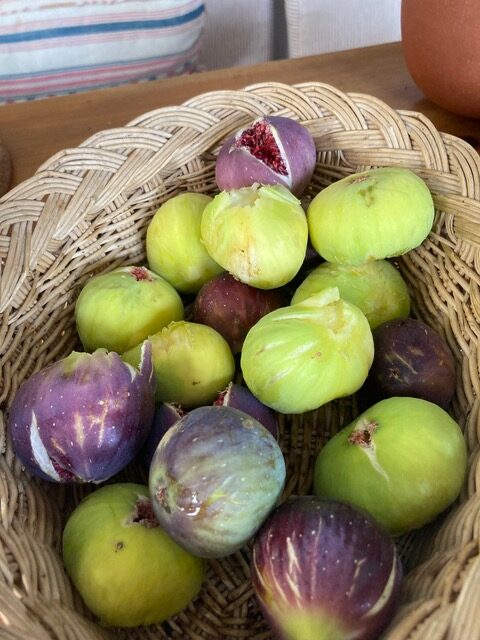 Expected later in the season: our Andriot fig crop.

Diana Farr Louis was born in the Big Apple but has lived in the Big Olive (Athens, Greece) far longer than she ever lived in the US. She was a member of the first Radcliffe class to receive a degree (in English) from Harvard . . . and went to Greece right after graduation, where she lost her heart to the people and the landscape. She spent the next year in Paris, where she learned to eat and cook at Cordon Bleu and earned her first $15. for writing—a travel piece for The International Herald Tribune. Ever since, travel and food have been among her favorite occupations and preoccupations. She moved to Greece in 1972, found just the right man, and has since contributed to almost every English-language publication in Athens, particularly The Athens News. That ten-year collaboration resulted in two books, Athens and Beyond, 30 Day Trips and Weekends, and Travels in Northern Greece. Wearing her food hat, by no means a toque, she has written for Greek Gourmet Traveler, The Art of Eating, Sabor, Kathimerini’s Greece Is, and such websites as Elizabeth Boleman-Herring’s www.greecetraveler.com. A regular contributor to www.culinarybackstreets.com, she is the author of two cookbooks, Prospero’s Kitchen, Mediterranean Cooking of the Ionian Islands from Corfu to Kythera (with June Marinos), and Feasting and Fasting in Crete. Most recently she co-edited A Taste of Greece, a collection of recipes, memories, and photographs from well-known personalities united by their love of Greece, in aid of the anti-food waste charity, Boroume. Her latest book, co-authored with Alexia Amvrazi and Diane Shugart, is 111 Places in Athens that you shouldn’t miss. (See Louis’ amazon.com Author Page for links to her her titles.) (Author Photos: Petros Ladas. Author Head Shot Augment: René Laanen.)
View all posts by Diana Farr Louis →
This entry was posted in Uncategorized. Bookmark the permalink. Follow any comments here with the RSS feed for this post. Both comments and trackbacks are currently closed.

8 Responses to An Ill Wind