“Life is a river of incalculable length, width, depth, and direction. Like the Biblical Jordan which rises in the Syrian hills before crossing the Sea of Galilee, life ultimately dribbles into the Dead Sea, which has no outlet being the lowest point on Earth. But like all rivers, at some point, the ripples flatten out and rise in a cloud of steam to seed the rains as well as the stars.”—Skip Eisiminger 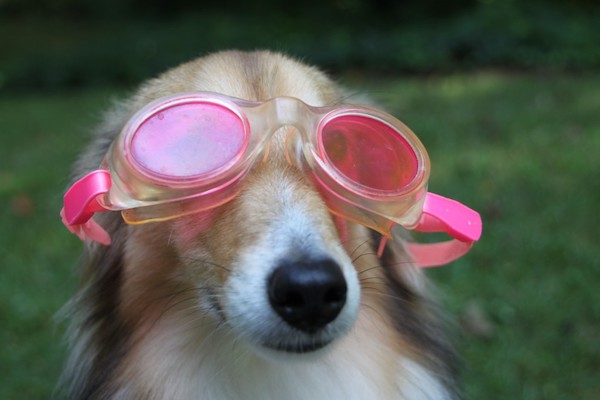 I. “At age ten and living in Manhattan, I foraged through the gift wrap and empty boxes looking for the Shetland pony Santa had promised me. ‘Perhaps next year,’ I thought.” —Carol Singer

CLEMSON South Carolina—(Weekly Hubris)—April 2019―According to Mark Kurlansky, author of Milk! if I’d been breast-fed for a year instead of three days, I’d likely be two to three inches taller and more optimistic. At 6’ 4” and 210 pounds, I had a difficult time getting my students to speak; imagine if I’d been 6’ 7”. As for my optimism, I’ve always been an Apollonian sort of fellow; indeed, when teaching four sections of English 101, it’s a vocational requirement. Ironically, the shadow I cast affirmed my sunny existence.

Many years ago, when a dear friend sank into depression, I wrote her: “Dear Kate, From what Hans [her husband] tells me, it sounds as if you’re suffering from ‘the pale cast of thought.’ This is troubling because I’ve always known you as one who took skillet and spatula on every fishing trip. Your optimism impressed me because Hans is no more an angler than I am. So, unpack that skillet and return to your embroidery and the people you love . . . .” Controlling as this sounds, optimism and humor on both sides of the equation are necessary for a lasting friendship. That’s why cynics are most comfortable with cynics.

Prone to optimism that I am, I was, nevertheless, apprehensive reading the history of cataract surgery before my wife went to have her eyes restored. I try to make it a rule not to do this sort of research because it always leads to insomnia. I blanched when I read that hardened cataracts were once removed with a small “hammer and chisel.” After the “surgery” was complete, the patient (as recently as the 1930s) was sent to bed with sand bags to hold the head stationary for two to three weeks. Even though my wife had opted for a laser procedure, I had a hard time silencing that surgical hammer. The noise returned a year later when I had the same procedure. If only someone had told me that on the ten-point pain scale, the worst sensation is a one or two, that knowledge would have done wonders for my confidence. If only I’d had the courage to ask.

Without the medical progress of the last half century, both my wife and I would be dead or severely incapacitated by now. She of breast cancer and a ruptured disc, and I with a torn tendon, three hernias, and an enlarged prostate. But the success of all seven operations has only increased my optimism. Whoever said, “Eat well, stay fit, and die anyway,” overlooked the long-term quality of life that diet, medicine, and exercise provide. Yes, death is real, but most of us enjoy more good years than bad before death uncreates us. For many and perhaps most, this too is a blessing. 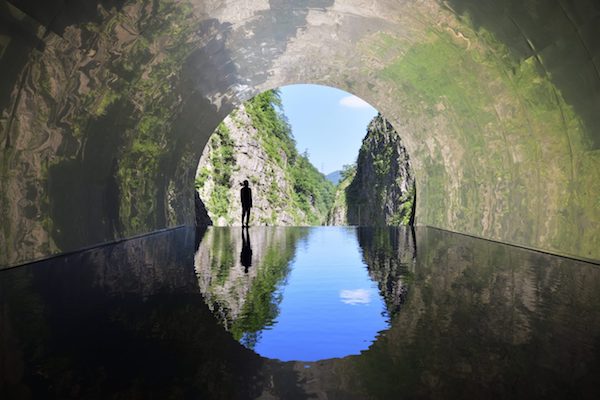 II. “The last one out of the tunnel should replace any burned out bulbs.”—The Wordspinner

Since Lowell, people have imagined God’s face coming toward them in the tunnel, or death, or a vendor selling batteries, or a birthing room, or an emergency room, or the lights of Hoboken, or the light in an empty refrigerator at two in the morning. Evidently, there’s a lot of wiggle room between a pitch-black tunnel and a clean, well-lit one that I share with Hemingway.

Another popular meme is the water glass that is partially filled: is it half full, half empty, waiting for a shot of vodka, or a watery grave for a careless bug? Is the water sparkling, mineral, or tap? As with the tunnel, is there a reflection at the bottom of the glass? Do we study this glass with rose or blue-tinted glasses? Are the observer’s glasses bifocals or progressive? Has the observer had cataract surgery? Can rose-colored glasses turn morose? (The odds are good if they are rosé-colored.) Is the glass just too large for its contents? Is the observer overlooking the oxygen and nitrogen in the top half of the glass—both as vital to life as water? Shouldn’t we consider the fact that many in the world cannot afford a glass, and the fact that about two million humans (mostly children) die a year from unclean water and the diarrhea it causes.

After this ramble, I think you’ll agree the measure taken of the glass and the tunnel’s light is complicated. 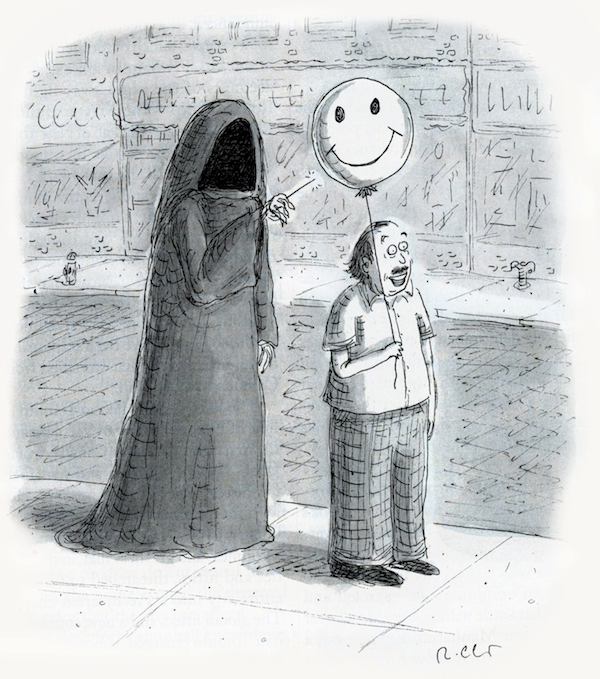 The dark and antic eye of cartoonist Roz Chast.

Even though the melanoma clinic is on the sunny side of the street as cartoonist Roz Chast has mapped for us, 40 percent of us will develop cancer, and millions will die of it. Sadly, recent studies show that optimism does not prolong the lives of cancer’s victims. Eden lies behind us, the pessimists say, not ahead. When someone urged an aging pessimist to smell a vase full of roses, he said, “What, and inhale a bee?”

That’s a chance I’m willing to take. I’ve never inhaled a bee in my 77 years because I take one simple precaution—I smell the roses with my eyes open. An aphid in the lungs never hurt anyone. 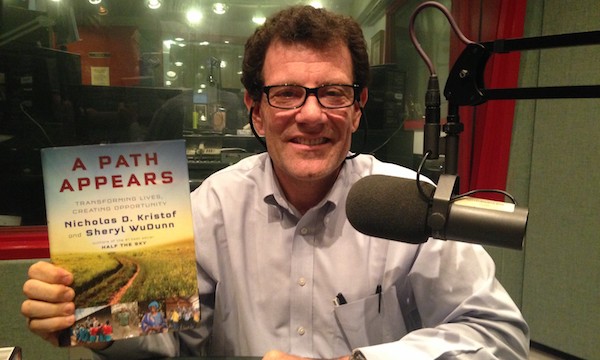 Nicholas Kristoff, one of our yea-sayers.

IV. “The future is under no obligation to continue the arc of historical progress, but it will, for the momentum created by four million years of progress is irresistible.”—The Wordspinner

No one needs to take my word for it that there are good reasons to be optimistic even two years into the presidency of Donald J. Trump. Here are a few of them: 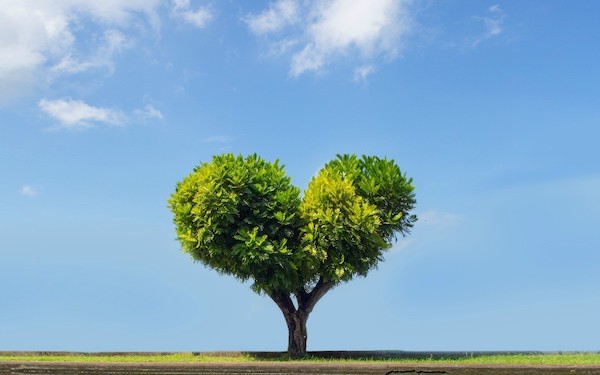 “Human love is our primary source of light.”

V. “Black as it darkles,/a star will sparkle.” —The Wordspinner

Life is a river of incalculable length, width, depth, and direction. Like the Biblical Jordan which rises in the Syrian hills before crossing the Sea of Galilee, life ultimately dribbles into the Dead Sea, which has no outlet being the lowest point on Earth. But like all rivers, at some point, the ripples flatten out and rise in a cloud of steam to seed the rains as well as the stars.

I take hope wherever I can find or manufacture it.

Gratitude for the Creation and my ride on “the Blue Planet” has always seemed an obligation: a binding contract, if you will, between me and the forces that propel us. When I consider the overwhelming odds I beat to get here, one in four hundred trillion by some calculations, I realize I did win the lottery. We all did. And though the atoms that comprise me are essentially immortal, I don’t expect that they will ever recombine in their present form again. Given those odds and the apparent indifference of nature, human love is our primary source for light, for if nature is not love, humans must be. I’ve been a recipient for so long, I’m obliged to return the favor.