How We Live, How We Die

“Every day, I hear that predictions are unwise. “Climate science is too complex,” people say. As if Thales of Miletus did not receive the same criticism upon correctly predicting a solar eclipse in 585 BC. As if many people did not believe predictions of lunar and solar eclipses as recently as earlier this year. Science is predictive with far greater accuracy and precision than any other alternative “way of knowing.” Indeed, predictions are fundamental to the continued pursuit of science. I can lead a person to knowledge, but I cannot make him think. I suspect my work as a teacher is nearly done.”—Guy McPherson

“I frequently come across an old acronym, YOLO. It means You Only Live Once. I disagree with the age-old YOLO. If you choose, you can live every moment of every day. I prefer YODO: You Only Die Once.”—Guy McPherson

British philosopher Bertrand Russell wrote in 1950: “After ages during which the earth produced harmless trilobites and butterflies, evolution progressed to the point at which it generated Neros, Genghis Khans, and Hitlers. This, however, is a passing nightmare; in time the earth will become again incapable of supporting life, and peace will return.”

Despite Russell’s prescient words, every day I read about human hubris, rooted in industrial civilization. We have convinced ourselves that we are stunningly special, as individuals, as members of industrial civilization, and as a species. We are special, at each of these levels, as I have frequently pointed out. Considerably less impressive is how we have chosen to act toward the living planet, including other humans, with the unearned bounty handed us. Our individual and collective failures to recognize and alter our destructive ways have predictably led to our demise as individuals, as a civilization, and as a species.

And yet we feign surprise—or, worse yet, some people actually are surprised—when individuals die, and when we learn about the near-term demise of our favorite civilization and our favorite species. The majority of the most horrifically reckless, self-absorbed animals in planetary history cannot accept the obvious outcome of its behavior. If only Bertrand Russell were here to comment.

The universe we inhabit is approximately 13.8 billion years old. Our species is slightly more than 300,000 years old. During a time exceeding considerably more than the initial 99 percent of the existence of the universe, Homo sapiens was not present. If the universe is all about us, as believed by people citing god(s), divine energy, “source” or various other imaginings, then the universe has been exceedingly patient.

This, of course, is all old news to thinking individuals. I am neither the first nor the wisest to tackle this issue: social commentators were slogging through the lonely path of hip-deep mud for generations before I showed up, trying desperately to be heard and understood.

I might, however, be among the last individuals to write social commentary on Earth. Surely there will a prize! 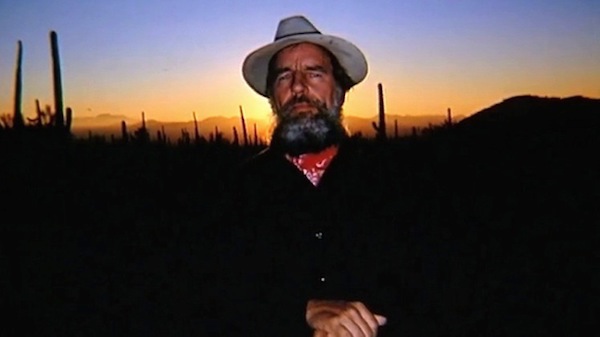 Edward Abbey, a voice in the wilderness.

Abrupt climate change is under way today. Industrial civilization teeters on the brink and, due to the aerosol masking effect, habitat for our species similarly risks going away. This is not a problem for the grandchildren. It is a predicament for today.

Any moment might be your last, as pointed out by Homer in the Illiad some 2,800 years ago. As desert anarchist and American social critic Edward Abbey pointed out a tad more recently, “Nirvana is now.”

Let us grab nirvana, one moment at a time.

Every day, I hear that predictions are unwise. “Climate science is too complex,” people say. As if Thales of Miletus did not receive the same criticism upon correctly predicting a solar eclipse in 585 BC. As if many people did not believe predictions of lunar and solar eclipses as recently as earlier this year. Science is predictive with far greater accuracy and precision than any other alternative “way of knowing.” Indeed, predictions are fundamental to the continued pursuit of science.

I can lead a person to knowledge, but I cannot make him think. I suspect my work as a teacher is nearly done.

How do we act in the face of a terminal diagnosis? How do we integrate this knowledge into our lives? Who do we become?

I strongly suspect we are the final humans on Earth. In light of this knowledge, will you live more fully each day? Each moment? Will you become the best human you can imagine?

Will you prioritize your work differently? Or your relationships?

Are you attached to the outcomes of your efforts? Or are you able courageously and virtuously to pursue justice, without a profound sense of disappointment when the universe does not bend to your will? Have you adopted, “Let go, or be dragged,” as one of the defining elements of your life?

Are you passionately pursuing a life of excellence? Or are you racing ever-faster on the treadmill upon which you were born?

Are you able to define the meanings of your life? Are you pursuing what you love?

These are the questions I asked in university classrooms for more than two decades. They still seem relevant.

As I pointed out in my latest missive here on Weekly Hubris, a rapid, near-term global-average rise in temperature could eliminate all life on Earth. So, too, could the uncontrolled meltdown of the world’s nuclear facilities. It seems Bertrand Russell was onto something, and I suspect his realization came far sooner than he imagined it would. We need not rely upon our sun going nova to turn Earth into a lifeless rock in space.

Although the scientific evidence is clear, our response is not. How we respond to our near-term, terminal diagnosis as individuals, families, communities, and a society, defines us. Yet nobody will remain to judge us: none will witness our “legacy.” Does the absence of witnesses negate our legacy? Or, to the contrary, is how we act in the face of impossible odds the premier example of our character?

23 Responses to How We Live, How We Die