“If worst comes to worst, I can always become one of those little old ladies who sell herbs on the sidewalk near the farmers’ markets or in downtown Athens. All of the herbs named in my title are flourishing in what passes for our garden here on Andros, in more than marketable quantities. Except for the parsley, that is, which is barely visible in its single pot.”—Diana Farr Louis 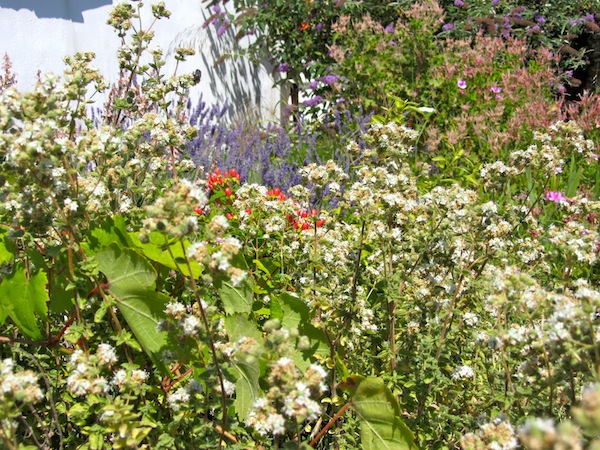 Oregano in the foreground, lavender beyond, vying for room in my chaotic “garden.”

ANDROS Greece—(Weekly Hubris)—(First Published on July 18, 2011)—If worst comes to worst, I can always become one of those little old ladies who sell herbs on the sidewalk near the farmers’ markets or in downtown Athens. All of the herbs named in my title are flourishing in what passes for our garden here on Andros, in more than marketable quantities. Except for the parsley, that is, which is barely visible in its single pot.

But unruly rosemary hedges flank us on two sides, oregano balloons way beyond its ample beds, mauve-tipped thyme crouches next to it, and the sage has flowered twice this spring. The mint is busy making babies, while the basil plants are fast becoming as spherical and grand as sultans’ turbans.

I gather armfuls of oregano branches every morning before I wilt in the sun, but wonder if I’ll ever finish. Oregano, or rigani as we call it in Greek, needs to be cut back to the last buds so it won’t get too “leggy.” I’ve already given several bunches to friends, but perhaps I should think seriously about drying it properly, tying it with ribbons or filling little sacs . . . and sitting on that Depression-Era sidewalk.

We’ve been away from Athens for just over a month. We’ve seen neither the tents and banners of the Aganaktismenoi/Indignados or the firebombing and broken marble that have turned Syntagma Square (the vital heart of the Greek capital) into a disaster area. No whiff of tear gas has passed our nostrils. Instead, the air here is drinkable and comes in flavors—like jasmine, rose, and “boisterous sea,” as well as the herbs.

But still we worry. We can’t escape the nightly news, the headlines in Greek and foreign papers, the endless analyses, proposals, and forecasts of doom.

“What would bankruptcy look like?” I ask my husband.

“Joy of the People” has lived through it: in 1941, when the Germans invaded; on and off during the World War Two and the Greek Civil War; almost a decade of being hungry, uncertain, and afraid, yet coping.

“The banks would close. You’d put your cash card in the ATM, but no cash would come out. They’d announce it on a Sunday to minimize the effect but, on Monday morning, there’d be hordes waiting to storm the supermarkets. Some would pay, most would not, and they would empty the shelves. We’d better have some food in the house—non-perishables such as beans and lentils, rice, oil, and canned tomatoes—because you and I can’t behave like that.”

He made me think of my mother-in-law. My first husband’s mother, Dora, or Dodo as we called her, couldn’t bring herself to stockpile sugar and flour as everyone else was doing back then. Instead, she made sure she had several demijohns of ouzo and dozens of cigarette cartons to get her through bad times.

She and an American friend later opened a soup kitchen for the children of their Athenian suburb, Maroussi. I don’t know where they got their supplies, but Dodo always fed the children before she had a bite of anything—no doubt staving off hunger pangs with healthy swigs of ouzo and frequent cigarettes.

One day though, on the way home, she spotted a familiar plant growing by the side of the road. Now Dodo was an amateur botanist so she would have had no trouble distinguishing a potato leaf from a weed. Eagerly, she knelt down and then scrabbled at the earth with a twig. No one saw her. She pocketed the handful of baby potatoes like a thief and went home to cook them.

“I felt so guilty, you cannot imagine,” she told me. “That was the first and last time I ever ate something I didn’t share with the others. Of course, they were no bigger than marbles, but delicious beyond words, even though I could hardly enjoy them, I was so afraid of being found out.”

Will it come to this if Greece defaults?

Probably not, but the scenario won’t be pretty. And so, instead of sticking my head in the sand, I stick it into my herbs.

And think how lucky we are—despite tremendous slashes to our income, taxes threatening to cut it further, a value-added-tax of 23 percent on all purchases, including food, and this deep insecurity—to have our own Mediterranean seasonings there for the picking. What with two bay trees, a couple of sprawling lavender bushes in full bloom, and a lichen-spotted, mini-verbena shrub, the only thing lacking is fennel.

But in a classic example of what goes around comes around, I took an IKEA bag full of rigani branches to the port’s biggest hotel last week. They’d wanted to decorate the dining room with it as well as use it in their cooking. On the way out, I passed some flower beds where tender sprigs of wild fennel had taken advantage of the gardener’s laissez-faire approach to weeds. Naturally, I plucked them.

Now, I have everything I need to set up shop on an Athens sidewalk. I won’t disturb the Nigerian Fake-Louis Vuitton purse sellers or the Gypsy women peddling lace tablecloths. I’ll take a position on an unclaimed corner near the Central Market (and well away from the tear gas), so I won’t compete with the other crones.

All that remains is to procure a shapeless black dress, an old shawl, and a packing case in which to display my bounty. But, to be truly authentic, I’d better find a way to sprout a few whiskers on my chin.

Oregano goes into tomato salads, when I’m feeling stingy about using too much basil. It mixes well with rosemary in any sort of chicken, fish, or meat dish, particularly grilled or roasted. Thyme and lamb, fennel and sea bass, bay leaf and lentils, mint and meatballs are all classic combinations. But for something more unusual, consider a sprig of rosemary in an apricot tart, wild fennel with octopus, oodles of mint with string beans, chicken stuffed under the skin with crumbled bay leaves (and garlic), and thyme steeped in vodka to make a divine liqueur.

Here are a couple of favorite recipes. 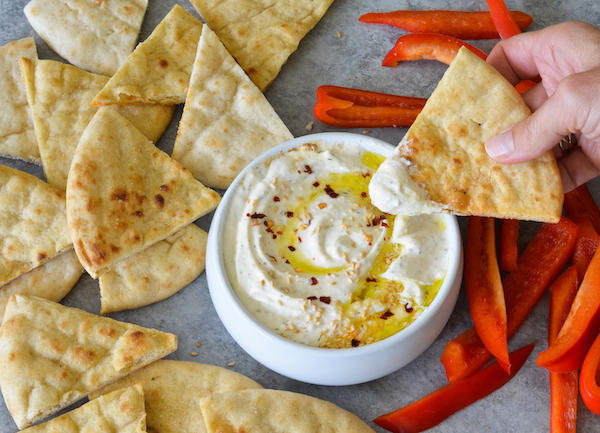 This one’s from my book, Prospero’s Kitchen, and will be one of the easiest and most successful hors d’oeuvres in your repertoire.

Toss all the ingredients into a food processor and whirr until smooth. Sometimes, I add a little yogurt to make the dip lighter. Don’t worry about exact amounts.

Serve with bread sticks or crudités.

This recipe (now in my book, Feasting and Fasting in Crete) came from an offbeat café/taverna in Chania, on Crete, called Rififi. Sadly, it no longer exists, but its owner, Litsa Anagnostaki, had a mantra that could apply to many Cretan cooks: “If you don’t have mint, you have nothing.”

These little balls are crunchy on the outside; creamy on the inside.

Cut the tops off the eggplants and cut in half, but do not peel. Parboil them for 5 minutes and drain. When cool enough to handle, squeeze as much excess water out of them as you can and chop in a food processor. Put the mixture in a colander and again squeeze small handfuls of it between your palms. Eggplants seem to be mostly water.

Chop together the various herbs and add them, along with the grated onion, cheese, flour, olive oil, baking soda, egg white, and seasonings to the chopped eggplant in a bowl. Mix thoroughly and refrigerate for an hour or two.

When you’re ready to eat, form the mixture into little balls or patties, dredge in flour, and fry in hot oil on both sides until crisp. Drain on paper towels before serving. Makes about 30 little patties.

One Response to Parsley, Sage, Rosemary & Thyme (Not To Mention Oregano, Basil & Mint)