“In daylight, one person in the house—the straight, white male—regularly storms out to rage impotently at the squirrels. In the night, the insomniac (I) goes out to startle the raccoons on the largest feeder. Delicately, balancing like equilibrists, they lean out on ample haunches from the porch rails, gathering in seed with their sapient paws. Beyond this porch, in the night, not often enough, I remember (dimly) what it was like to be in wilderness places in this country, and on my beloved Aegean islands, off-season, looked down upon by nothing but a generous alphabet of mute stars set in the deep wine-darkness. Will I ever, really, leave this house again?”—Elizabeth Boleman-Herring 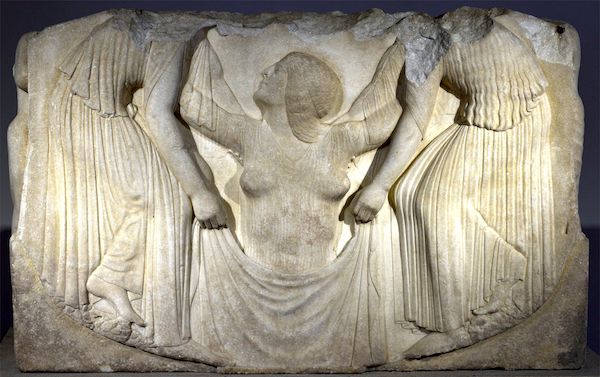 Panel from the Ludovisi Throne.

“Cassandra: One thing left. I want to sing my own dirge. I pray to the sun, to this last minute of life: let my enemies pay with blood for what they did to me—I’m just a killed slave, easy fistful of death. But you, o humans, o human things—when a man is happy, a shadow could overturn it. When life goes wrong, a wet sponge erases the whole picture. You, you, I pity.―Aeschylus, “Agamemnon”

PENDLETON South Carolina—(Weekly Hubris)—1 June 2020—From where I sit, virtually housebound, on a still-unfinished and haphazardly built wraparound porch, on a little-used, badly-paved road, in a tiny Upcountry South Carolina town, I look out on a massive oak in full leaf (my neighbor, Davie’s, pride) and a hoary magnolia in full bloom; the latter, one of the primary reasons we bought this acre of land some three years ago.

There are bird feeders to which purple finches, downy woodpeckers, tufted titmice, chickadees, nuthatches, cardinals, and all the local varieties of hummingbird are attached, all day long. Doves and thrushes and the occasional towhee peck at seed spilled from the feeders. Hawks and owls overfly us, in their assigned hour.

In daylight, one person in the house—the straight, white male—regularly storms out to rage impotently at the squirrels. In the night, the insomniac (I) goes out to startle the raccoons on the largest feeder. Delicately, balancing like equilibrists, they lean out on ample haunches from the porch rails, gathering in seed with their sapient paws.

Beyond this porch, in the night, not often enough, I remember (dimly) what it was like to be in wilderness places in this country, and on my beloved Aegean islands, off-season, looked down upon by nothing but a generous alphabet of mute stars set in the deep wine-darkness.

Will I ever, really, leave this house again?

Off to my right, here, is a small, spanking-new vegetable garden, strung about with monofilament at various heights (said to ward off deer: thank you, Genia), and guarded by a hastily-erected scarecrow wearing an ancient Clemson University “Band” shirt.

An entire day can pass without my seeing anyone on our street. Still, three blocks away, the town square in Pendleton is thronged, these early summer nights: customers stand in tight queues at the ice-cream shop and sit at café tables, beneath umbrellas, outside three busy restaurants. 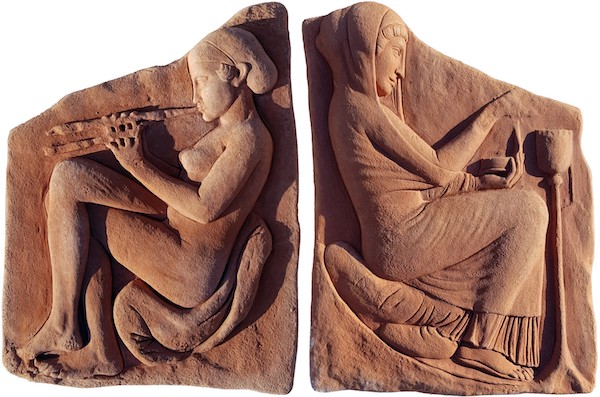 Terracotta copy of a detail from the Ludovisi Throne.

I cannot be blamed for feeling as though, in strict quarantine here, I inhabit a dystopia out of Kafka. Three blocks away, people are un-masked, un-gloved, un-distanced: in the rest of our little hamlet, it might as well be Spring Break at Myrtle Beach for all the blithe locals seem to care about catching SARS-CoV-2 or carrying it home, special delivery, to their witless families. (Few of them are old enough, I grant you, to remember Alfred E. Neuman of “Mad” magazine: “What, Me worry?!” But most of them resemble Neuman in almost every way, though none of them do I find amusing.)

I have not written about Trump since my columns of 2016 and early 2017 (“Quislings in Pinstripes,” “The Face in My Nightmares: Trump,” and “Our Evil, Our Shadow, Our Trump”). There seemed no need. Certainly, my words about him could have no effect. At 68, I know one small simple truth: most of the time, when I write or speak, I am pissing into the wind. The very fierce headwind of my times.

I knew this pandemic was coming. I knew because I am one of the 40-something percent of Americans with a functioning passport. I knew because I have lived in the so-called Developing World (now, there’s a misnomer disguised as a euphemism for the ages!), and I have been desperately ill, at various times in my life, with diseases not seen on my home shores in a long lifetime.

I have not written about Trump, because I saw him coming, too. What is there to say, really, about the train that hits you?

As the tsunami approaches, one writes while it is still way, way out there on the distant horizon: when the seawater is sucked up and the fish are left flapping on the shore, one . . . is at a loss for words.

I bombinated in the pre-tsunami void about Reagan, both Bushes, the Koch Brothers (et al), both complicit political parties in the US, and the parade of sleazebags of both colors, red and blue, in Washington; about capitalism (and other held-to-the-bosom American -isms), etc., etc., etc.; about what has long been leading up to Trump.

Bombinating does no good, I opine. My bombinating has done no good.

Let’s see if commiserating, if simply describing as opposed to railing against, does any good. Who knows, it might?

All things considered, though, Cassandra’s bone-tired.

This little piece of writing, in no discernible genre, comes simply as a place-holder to say: I’m still here and, apparently, so are you.

If I have a useful little something to share with you today, on the 1st of June, 2020, it is this: I am trying not to use the word “Trump” any longer. I’m seeking synonyms. Testing them. Trying them out. 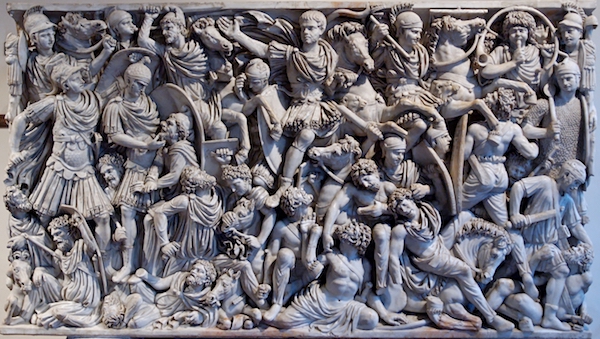 I know: it is an exercise in futility.

I expect Doom to do anything now. Declare martial law. Suspend elections. Descend to a bunker and then have loads of live virus dropped on all of us still standing from high-tech crop-dusters. Chain himself to a bedpost in the Lincoln Bedroom. Slip Biden an envelope of sarin on his way in the door.

Doom is capable of anything. Doom will do anything. See if he doesn’t.

I knew Doom was coming: I just didn’t know his name. I’ve been writing about Doom, under his many aliases, for decades.

With Doom running things, Colin Kaepernick is barred from taking a knee, but the men who murdered George Floyd can kneel on his neck and snuff out his life in broad daylight.

With Doom in charge, 100,000-and-exponentially-counting Americans are dead of COVID, and the rest of us, those still vertical, are out getting or giving haircuts, waiting in line for ice-cream, or (some of us) walled up in our houses, knowing how our immune systems will respond to this infection.

With Doom in charge, the line between the ignorant-and-damned and those with a brain in their heads is an obvious one.

The line—between those who voted for “The Abyss 2016” and who will vote for him again in 2020—and me and mine is brilliantly lit.

Thing is, with Doom at the helm, I and mine, too, are probably, most probably . . . doomed.

All Cassandra can say, at this point, is, “Vote. Vote if you can. Vote if we’re allowed to vote; hope that our votes are then counted.”

Vote, and hope that Putin is not, once again, in full-on, obvious control of Doom, Pence, Barr, McConnell, and all our doomed Red-state governors. In control of our ballot boxes.

Meanwhile, I’m going to fill the bird feeders and harvest the tomatoes and wave at you when you pass in your car, its windows rolled up.

I’m here, but I’m damned if I have anything else to say to you about Doom.

Till November, or till such time as the votes in the presidential election are cast and counted, you know where to find Cassandra. She’ll be here on the porch or just behind the front door, silent, and shaking in her shoes.

Author’s Post Script: For those whom I love and will not or may not see again, Billy Joel’s 1983 love song, “And So It Goes,” by The Stay at Home Choir with The King’s Singers.

10 Responses to Cassandra of South Carolina