“First Lady Nancy Reagan said, ‘I’m against abortion. On the other hand, I believe in a woman’s choice.’ In 1992, Time reported that while 75 percent of Americans ‘approve of a woman’s right to an abortion,’ 60 percent say, ‘It’s murder.’ Something doesn’t add up here, but one thing is clear: ever since prenatal screening began in the 1970s informing women of their fetuses’ health and potential, a heavy burden has been lain on all of us.”—Skip Eisiminger 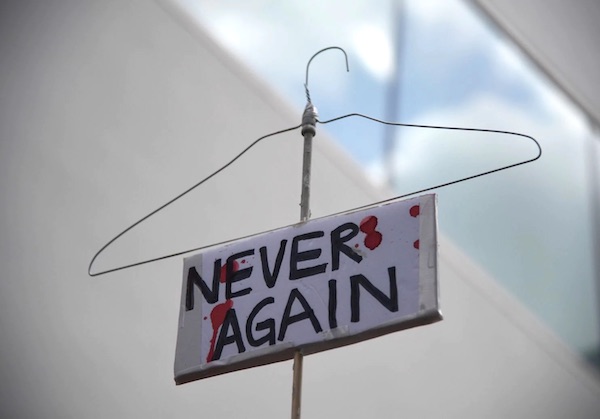 I. “If you’re opposed to abortion, don’t have one.”—Scott Andrews

CLEMSON South Carolina—(Weekly Hubris)—October 2019—Before Google, while browsing in the Princeton University library, I thought I’d see if I could find any “Eisimingers” in Princeton’s in-house reference materials. In one index I’d never seen before nor have, since, I found “Dr. John W. Eisiminger, osteopath,” who, in 1932 had performed an illegal abortion on Miss Virginia Lee Wyckoff, which resulted in septicemia and her subsequent death. Now, thanks to Google, details of Dr. Eisiminger’s sordid enterprise have been published for the world to see.

No matter how tenuous it might be, nothing personalizes and amplifies a newsworthy item like a family connection. For years, I told no one of the felon in the family, a distant cousin of my paternal grandfather, but his story appears to have several dedicated neurons and dendrites in my hippocampus. No one else in the family has performed or had an abortion that I’m aware of, but several friends have, and their fraught experiences are lodged in my brain next to that other “Dr. Eisiminger.”

Sara, I’ll call her, was in love with a minor-league baseball pitcher. When she told her 19-year-old lover she was pregnant, he reported that he was scheduled to move up to Double A ball if he could improve his control; consequently, he had no room in his life for Sara or her child. At age 21, four years before her brain and seven years before his had fully developed, Sara sterilized a coat hanger and ended her chances of ever bearing children.

When that bouncing Vatican-roulette ball stopped on black, Elke’s Catholic squire sent her to Berlin for an abortion because, “If word got out,” he said, “it would kill my mother.” When Elke returned, he informed her that he’d “moved on.” Thirty years later, drunk in the middle of the night and a continent away, he telephoned her. She hung up. After her divorce, she just wanted “to talk,” but she’d lost his number.

Despondent that her pregnancy would cost her a lucrative job with the state, Martha jumped from a second-story window of her parents’ home. The attempt to abort herself failed; her sperm-donor vanished, and her guilt led to so many indulgences, her firstborn was near-fatally pampered. Today, he’s serving 30 years in prison on drug-related charges, and she visits him every Friday afternoon whether he wants to see her or not.

Finally, there’s Louise. She and her husband, who’d long considered himself a “seedless grape,” were thrilled to learn she was pregnant, but shortly after receiving that news, her doctor reported that Louise had metastatic breast cancer. Rather than undergo chemo- or radiation therapy, fearing their effects on the fragile life within her, Louise carried her fetus to term and died a short while later from the cancer she’d refused to be treated for. Her husband had wanted to abort and adopt, but her refusal left him to raise a child he subconsciously blamed for the death of his wife. 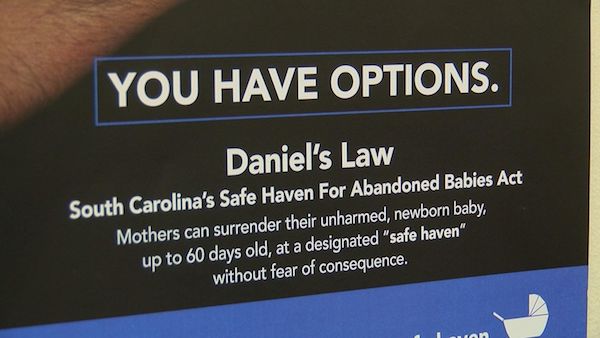 Daniel’s Law was designed to provide a safe haven for abandoned babies.

II. Hitler’s mother was dissuaded from aborting Adolf by her family doctor.—Various sources

Several years ago, after a lively discussion of Hemingway’s story “Hills Like White Elephants,” in which an unwed couple debate the merits of an abortion without ever using the word, one of my sophomores came to see me during office hours. She took a seat and said she was pregnant, unmarried, and thinking of dropping out of school. Then she reminded me of something I already knew: she’d transferred to Clemson from Bob Jones University, a straitlaced Baptist institution located about 30 miles away. After offering her a tissue and assuring her that I did not think any less of her for what she’d confided in me, I asked her why she’d mentioned her BJU connection. She said her teachers there had insisted that a “fetus,” emphasizing the word I’d used in class, is fully Homo sapiens. One teacher had told her class that John the Baptist’s “leap for joy” in his mother’s womb during a visit from Mary, her pregnant relative, is all the proof anyone needs that the life in a womb is a conscious human, not a mindless zygote, embryo, or fetus. To extinguish that life, the teacher said, is infanticide.

I said I would prefer “benign growth” to “infant,” but we could quibble over terms until the cows come home when neither of us owned any cattle. I said that a fetus secured to its mother via its umbilical and thus utterly dependent on her is a single organism, not two. Like wisdom teeth, they are part of one organism until extracted. I said that when Yahweh commanded Eve to go forth and multiply, the human census stood at two. I added that, while a third-trimester fetus has been observed to suck its thumb and fondle itself, her first-trimester fetus was doing none of those things. Finally, I said that while adoption was an alternative, the guilt associated with giving up an infant surely would be greater than aborting a two-month-old fetus. In any event, guilt would be something she’d have to cope with.

With her permission, I telephoned the university clinic and made an appointment with a psychologist who was far better educated and experienced to counsel her than I was. A week later, she dropped out of school. The following semester, a mutual friend said she’d taken advantage of “Daniel’s Law” and left her baby at the Greenville Memorial Hospital without fear of prosecution.

Something doesn’t add up here.

The ignorance of my student above should not be a surprise when one advocate compared an unwanted pregnancy to a broken leg and an abortion to a plaster cast. Few people who break a leg will opt to leave the bone unset, but every woman who discovers she is pregnant should have the option to safely end it just as Louise, mentioned above, had every right to refuse chemo. It was her choice. Even so, it should be made with all fully explained options on the table.

We have come a long way from the days when arithmetic alone was available to a woman planning her family. But, according to a friend who teaches a high-school class in family planning, 18 percent of senior males say if they are standing up during intercourse, the egg cannot be fertilized. Obviously, these young men have not seen salmon swimming up the Columbia River. About the same percentage of women say that if they don’t achieve orgasm, duck-walk to the commode, and use a cola douche immediately afterwards they won’t conceive. One girl told her teacher that an oral contraceptive is a firmly spoken, clearly enunciated “No.”

But it’s not just the young. First Lady Nancy Reagan said, “I’m against abortion. On the other hand, I believe in a woman’s choice.” In 1992, Time reported that while 75 percent of Americans “approve of a woman’s right to an abortion,” 60 percent say, “It’s murder.” Something doesn’t add up here, but one thing is clear: ever since prenatal screening began in the 1970s informing women of their fetuses’ health and potential, a heavy burden has been lain on all of us. 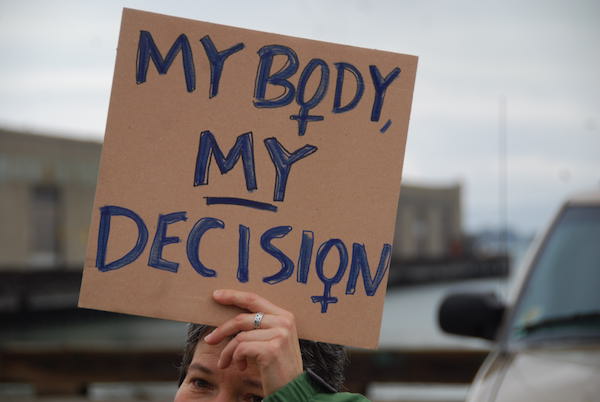 Just as ballet is women, so is pregnancy.

IV. “A crying baby is the best form of birth control.”—Carole Tabron

One mother of three girls sought an abortion after an ultrasound showed a fetus of “undesirable gender.” On the flip side of the issue is an Alabama woman who was raped by her step-uncle when she was 15, denied an abortion and, in June of 2019, is facing the possibility of sharing custody of the child when her relative is released from prison on drug charges. Somewhere between these two extremes (“Abortion is another form of family planning,” and, “You will carry this fetus to term regardless of how it was conceived or what the risks might be to you.”) must lie reason. For me, reason in these matters is anchored in the fully informed mother-to-be who will bear and may raise the child herself.

Medical technology can now predict whether a fetus will develop cystic fibrosis, Down’s syndrome, sickle-cell anemia, and many other genetic disorders. But every disorder requires a different approach for the birth mother and her doctors. When 348 American women were asked whether they’d abort in the first trimester if their fetus was certain to have the gene for Huntington’s disease, 32 percent said they would; 60 percent of French women said they would, and 64 percent of geneticists said they would. Assuming I had a voice in this decision, and given the fact that Huntington’s is incurable, I’d advise terminating the pregnancy. But even if I’m the father of this doomed child, it’s not my decision. I’m the male dancer lending support to the pirouetting ballerina, for just as ballet is woman, so is pregnancy.

It’s your choice, no one else’s.

V. “It makes more sense to unload the gun than wear a bulletproof vest.”—Anonymous

After the birth of our second child, I had a vasectomy and have been firing blanks ever since. Had one or both of our children died, I would have been irreconcilably wounded, but I was fortunate. Given that my wife and I have enjoyed good health and financial security for most of our 60-year marriage, abortion was never an option for us. But if a doctor had told any of the women in my life that she was carrying a brainless fetus or one she did not cherish, I would have said, “It’s your choice, no one else’s and, whatever it is, I support you.”

In an ideal world, all pregnancies and children would be welcome; all parents would be financially independent; there’d be no genetic defects, no rape, no incest, and no mothers’ lives would be at risk in the delivery room. Until society reaches that level of perfection, abortions are inevitable and should be legal.