“I am not suggesting that indigenous people or the Greek Cynics were faultless. Rather, I am indicating there is more than one way to live. There are numerous examples, still, of societies dominated by people who live beyond the obsession with possessions. There is more than the singular approach we take . . . to, well, take. But, in this culture, takers vastly outnumber leavers (to use words popularized by American author Daniel Quinn). Nor am I suggesting that I have not benefited from the concept of ownership. As a heterosexual Caucasian man, I have lived at the apex of ownership—i.e., patriarchy—for my entire adult life.”—Dr. Guy McPherson 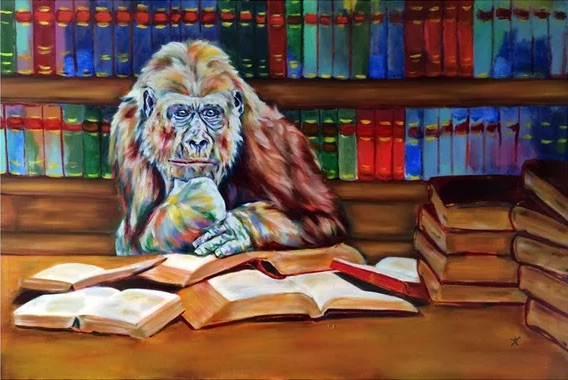 MAITLAND Florida—(Weekly Hubris)—1 December 2020—Occasionally I see this question, usually in a social-media forum: If you were to eliminate one thing from society, what would it be?

For me, ownership comes to mind. The living planet faces many problems. Many seem to be rooted in ownership.

As nearly as I can distinguish, ownership did not exist until civilizations arose. Humans spent millions of years sharing with and nurturing one another in ways that led to a relatively benign human existence. A few thousand years into civilization, and everybody wants more. Ownership is the fundamental concept underlying the pathology of capitalism.

More of everything. More for me; not for you. As Gordon Gekko pointed out in the 1987 film Wall Street, it’s a zero-sum game. Every bit for me means less for you. I cannot have you taking any because you are taking it away from me.

Contemporary neoclassical economists proclaim a contrary message. The rising tide of economic prosperity, they say, floats all boats. Blinded by the ridiculous assumptions of a societal experiment gone horribly awry, they continue to promote the pathological system that has taken us to the edge of our own extinction. Driven by the love of money and its underlying monetary system, they will continue to benefit from the system until, surprisingly to them, it no longer delivers privilege and power to them.

It was not always this way, even after civilizations arose. The Greek Cynics were noted for the notion of using what was available even across the boundaries of ownership. They believed humans were motivated by selfishness, but they also believed 1) virtue is the highest good, 2) the essence of virtue is self-control, and 3) surrender to any external influence is beneath human dignity. In other words, they considered dignity a worthy pursuit, perhaps more important than the acquisition of personal power.

I am not suggesting that indigenous people or the Greek Cynics were faultless. Rather, I am indicating there is more than one way to live. There are numerous examples, still, of societies dominated by people who live beyond the obsession with possessions. There is more than the singular approach we take . . . to, well, take. But, in this culture, takers vastly outnumber leavers (to use words popularized by American author Daniel Quinn).

Nor am I suggesting that I have not benefited from the concept of ownership. As a heterosexual Caucasian man, I have lived at the apex of ownership—i.e., patriarchy—for my entire adult life.

My own personal awakening to the disadvantages of ownership came shortly after I moved to an off-grid homestead in the wilds of New Mexico. I was surrounded by people who thought differently than is customary. I learned about and employed the gift economy. I followed the lead of others in sharing expensive items and inexpensive but hearty meals. After considerable quiet and deep reflection, I realized that there is more than one way to live. In response, my approach was graciously described in Truth-Out: “Make the most, imperatively, of what we have and can do now, with an emphasis on excellence in every endeavor, all while accepting that everything is telling us that we are on our way to extinction (soon rather than later), and prepare to take leave of the good earth without losing our humanity―graciously, with dignity.” In short, my lifelong pursuit of questioning the answers led me down a proverbial rabbit hole that exposed several undesirable aspects of the notion of ownership.

Where does ownership come from? Where does it lead?

The word itself dates only to the 16th Century. Obviously, the roots go much deeper. As is often the case, I turn to the ancients for perspective.

The opinions of Plato and Aristotle differed significantly with respect to ownership. Plato believed the idea created divisive inequalities. Historical and contemporary events support Plato’s view, rather than the view of his student, Aristotle. The latter believed private property enabled people to receive the full benefit of their labor (and also that of their slaves, of course). Aristotle’s ownership of slaves indicates an inherently strong personal motivation to support the idea of ownership.

Where does ownership take us? We need only investigate reality, based on recent trends, to see where our species is headed. And that place is right to the edge of extinction. To the notion that might makes right, and that only power is needed to justify the acquisition of more power. More is all there is. More is its own reward in a culture that values power over justice and more over better. When quantity becomes the only quality worth having, more is all we have. In a culture that values accomplishments over relationships and acquisitions over emotions, more is the only attribute worth pursuing. How could it be any different?

For individuals, though, it can be different. As individuals, we can seek freedom from the straitjacket of culture. We can seek love over power, relationships over accomplishments, and better over more. A high price will be paid for such pursuits, however. There will be no reward beyond freedom from insanity, which comes with the prevailing sentiment that the sane are insane. As Indian speaker and writer Jiddu Krishnamurti[https://en.wikipedia.org/wiki/Jiddu_Krishnamurti] pointed out, “It is no measure of health to be well adjusted to a profoundly sick society.”

Editor’s Note: Dr. McPherson, above, references one of his Ur-Mentors, author and cultural critic Daniel Quinn. Following McPherson’s brief meditation on ownership, I would like to include one of Quinn’s teaching-stories:

The ship was sinking—and sinking fast. The captain told the passengers and crew, ‘We’ve got to get the lifeboats in the water right away.’

But the crew said, ‘First we have to end capitalist oppression of the working class. Then we’ll take care of the lifeboats.’

Then the women said, ‘First we want equal pay for equal work. The lifeboats can wait.’

The racial minorities said, ‘First we need to end racial discrimination. Then seating in the lifeboats will be allotted fairly.’

The captain said, ‘These are all important issues, but they won’t matter a damn if we don’t survive. We’ve got to lower the lifeboats right away!’

But the religionists said, ‘First we need to bring prayer back into the classroom. This is more important than lifeboats.’

Then the pro-life contingent said, ‘First we must outlaw abortion. Fetuses have just as much right to be in those lifeboats as anyone else.’

The right-to-choose contingent said, ‘First acknowledge our right to abortion, then we’ll help with the lifeboats.’

The socialists said, ‘First we must redistribute the wealth. Once that’s done, everyone will work equally hard at lowering the lifeboats.’

The animal-rights activists said, ‘First we must end the use of animals in medical experiments. We can’t let this be subordinated to lowering the lifeboats.’

Finally, the ship sank, and because none of the lifeboats had been lowered, everyone drowned.

The last thought of more than one of them was, ‘I never dreamed that solving humanity’s problems would take so long—or that the ship would sink so SUDDENLY.’

10 Responses to On Ownership