Tis The Season for “Avgotaraho”

“No it’s not a type of chocolate; it’s Greece’s own brand of caviar: bottargo, slightly salted and barely dried gray mullet roe, fished from the lagoons on this country’s west coast in late summer. Dipped in several coats of sunflower-yellow beeswax to keep it moist, avgotaraho has been our treat of preference since I arrived in Greece. My spouse, Harilaos, remembers his first taste at age twelve. It was/is far too precious to be squandered on the very young.”—Diana Farr Louis 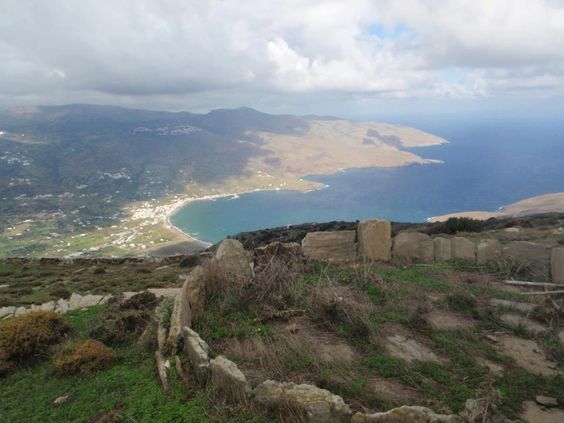 KIFISSIA Greece—(Weekly Hubris)—(First Published on December 5, 2011)—Well, it isn’t really the season to be jolly, not quite, and yet bright lights are already twirled like beaded snakes round all the lamp posts on my street, and twinkling Christmas messages arch over every block. The electrical appliances shop at the far end is ablaze with decorations, though it isn’t even December as I write.

Meanwhile, the street parallel to ours is being dug up to receive—wait for it—a new surface of cobblestones, interspersed with yellow ridged plaques for the blind. Never mind that even sighted pedestrians take their life in their hands walking on that sidewalk-less thoroughfare. And that the blind studiously avoid those ridged traps that make even the sure-footed wobble.

These “improvements” to our by no means central neighborhood and the premature illumination of festive decorations make me gnash my teeth at the frivolous spending of municipal funds at a time when “we” should be economizing. At a time when friends are collecting blankets for the newly homeless or when the US ambassador and his wife spend two hours on the Monday after Thanksgiving handing out food at a shelter in downtown Athens.

But instead of whingeing* and cussing the advent of Advent, I’ll try putting my mind to positive anticipation of the holiday season.

. . . like my friend Yannis Batis on Andros, the one with the wonderful shop that sells artisanal/organic Greek products whom I mentioned in my last column. He told me that he long ago stopped listening to the news and, right now, with business slow, he’s taken to whitewashing the curbsides, docksides, and any other dingy surface in Andros’s port town of Gavrio. 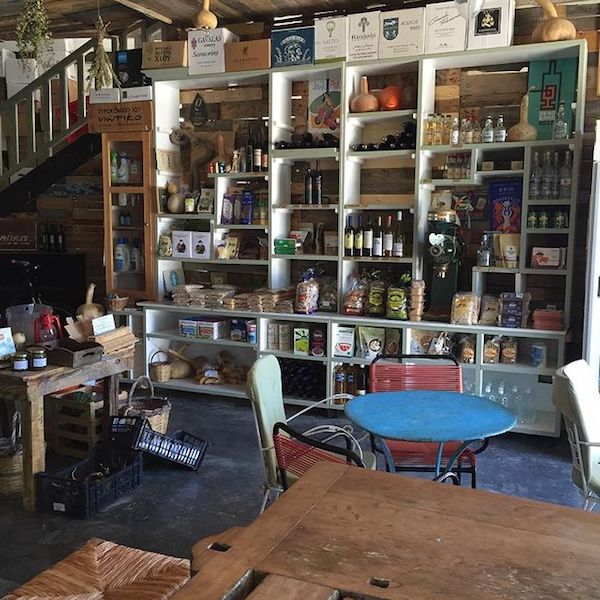 “It gives me something to do, something worthwhile, and we—a group of young people like me—want to make the place gleam in time for St. Nicholas’s Day [December 6th], the traditional start of Greek Christmas festivities.”

“I’m not a professional, so don’t expect perfection,” added Yannis, as he very professionally slipped his immaculate Slow Food apron over his spattered jeans to grab me a small wheel of aged Samothraki cheese, as nutty as Parmesan, from his fridge.

Well, obviously, I’m not about to get out my bucket and paintbrush, but I am going to give special local foods as presents this year. Who needs another scarf or trinket, anyway; another tie, or coffee-table picture book? Actually, what most of us would welcome is a bit more cash but, absent that, my nearest and dearest will be receiving such delectables as tangerine-flavored marzipan from Chios, fermented kopanisti (cheese) from Andros, citrus-infused liqueur from Naxos, lightly salted pistachios from Aegina . . .  perhaps accompanied by a small sachet of home-grown lavender or a jar of hot garlic-tomato chutney fatto in casa.

The prize gift, usually reserved for the immediate family, will be—as it is every year—a bar of succulent, melt-in-the-mouth, palate-pleasing, almost orgasmic avgotaraho.

No it’s not a type of chocolate; it’s Greece’s own brand of caviar: bottargo, slightly salted and barely dried gray mullet roe, fished from the lagoons on this country’s west coast in late summer. Dipped in several coats of sunflower-yellow beeswax to keep it moist, avgotaraho has been our treat of preference since I arrived in Greece. My spouse, Harilaos, remembers his first taste at age twelve. It was/is far too precious to be squandered on the very young.

For years, we bought it at Christmas and birthdays but, about four years ago, our relationship to this delicacy reached a new level of intimacy when we went fishing with the country’s main producer and discovered how it is made. 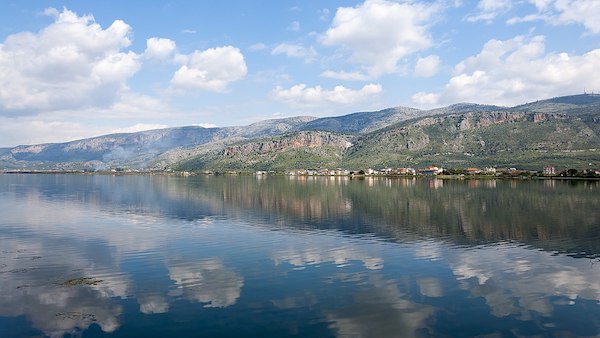 Zafiris Trikalinos, a short, stocky bundle of energy, comes from Aetoliko, an island/village deep in the lagoon of Missolonghi (where Lord Byron succumbed to malaria and, by dying, drew attention to his favorite cause, the Greek fight for independence).

He has receipts proving that his forefathers were salting and selling avgotaraho just a few decades later (in the 1850s), so the knowledge and passion for the stuff were part of his heritage. By 1997, before he turned 40, he had established a virtual monopoly on all the avgotaraho produced in Greece.

In a way, the mullet fishing industry may be compared to cattle raising in America before the factory era.

The fish, mostly gray mullet in summer, enter the lagoons from the deeper sea to feed and then try to return to it to lay their eggs. The lagoons resemble huge corrals—or, in the case of Missolonghi, several corrals—with netted walls funneling into gates or weirs.

As the mullet swim towards the exit, they find the passage shut. Fishermen scoop them out of the traps and separate males from females. At a lagoon in the Peloponnese, we watched them thrashing, occasionally leaping clear of the trap, and then being slit open, their yellow, twin-lobed egg sacs lifted out and placed delicately on ice for Zafiris to carry back to Athens in his van. (The fish themselves are sold at the local market.)

That was all most interesting but, a few weeks later, at the end of September, Zafiris gave us the romantic version and an experience we will never forget. We met in Aetoliko where, as a true Greek in his home town, he took us to lunch at a seaside taverna, where platter followed platter until we were gasping for mercy. Grilled eel, baked eel, butterflied grilled mullet, bream with celery and lemon sauce, raw and boiled salads, and a spinach pie: so much food it wouldn’t fit on one table. We also consumed an excessive amount of wine but, luckily, no dessert—that’s not part of the tradition.

Dinner was light and the next morning we rose before dawn and boarded a friend’s motorboat that would take us all to an islet in the middle of the lagoon, where Zafiris’s brother, Michalis, has a fishery. Soon the dark vanished and sea and sky turned red, with only the “fence posts” of the corrals etched on the horizon in black. 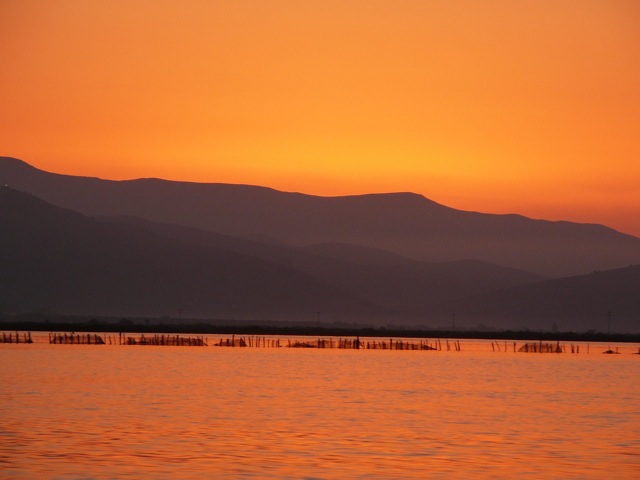 Whoever said the sea was blue?

Because Michalis had instructed Zafiris to wait for his “all clear” so we wouldn’t frighten the fish, we drifted to an improbable floating church and watched the colors changing on the flat, watery expanse. Upon Michalis’s OK, we started up the engine and eventually came to our destination, a very scruffy islet surrounded by a tangle of nets, crates, plastic bottles, defunct machines, and a couple of derelict shacks guarded by a pair of bedraggled hounds.

Michalis, younger, darker, and taller than Zafiris, welcomed us with paper cups of coffee, and cookies, and then punted us out to the traps. Quiet reigned, but for an occasional splash, punctuated by Michalis’s soft tales of hard work, fish poachers, constant repairs, and his total love of the boundless emptiness, which he sometimes shares with his wife and kids.

All the while, he was plunging his net into traps and lifting out fish. The catch was not nearly as impressive as it had been in the Peloponnese, but more varied.

Eight traps later (it must have been around 11 a.m. by now), we returned to the islet. While two other fishermen quickly scaled and salted some small fish, Michalis and Zafiris lay the battered table with a feast worth a king’s ransom: thickly sliced avgotaraho, avgotarahosalata (like taramosalata), some fresh bread, and Babatzim tsipouro (think grappa or schnapps of the highest quality), served incongruously on plastic plates instead of the finest Limoges. And, as if that were not enough, Zafiris sprinkled grated avgotaraho on top of everything else. 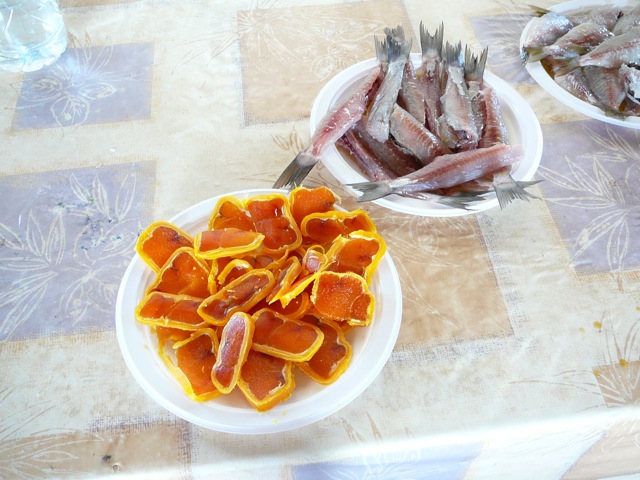 Part of our feast, lagoon sashimi and avgotaraho.

We ate and drank and told fish stories for hours, and when we finally got back to Aetoliko and said good-bye, Zafiris stuffed our car with bags of mullet, which we’d be eating all week.

These days, or indeed any days, avgotaraho is considered a luxury at, say, 120 euros a kilo (three times that in the US), but here an average-sized bar of this Greek gold will cost about 30 to 40 euros. And, knowing all the steps and care required to get it from fishery to shop, I don’t mind the expense. After all, we don’t gobble it down in one day, and each iodine-scented bite reminds me of that unrepeatable day, the beauty of the lagoon, and the warmth and hospitality of the Trikalinos brothers.

Not a bad substitute for commercialized Christmas cheer.

Avgotaraho should be kept in the refrigerator until an hour before you want to eat it. We just slice it, not too finely—about a centimeter thick—peel off the wax, and sometimes can’t even be bothered to put it on a plate. But, to be more civilized, serve it with some fresh brown bread, some unsalted butter, half a lemon, and a bottle of your favorite white wine, tsipouro, or champagne.

Pour a few tablespoons of olive oil into a pan and heat gently. Sprinkle in some hot pepper flakes, grated lemon zest, chopped garlic and sauté for a minute. Stir in a splash of sweet wine, add a half dozen slices of avgotaraho—which you have mashed with a fork—along with some chopped parsley. Simmer for another minute and toss it with drained spaghetti.

If you want to read the whole story of Trikalinos avgotaraho, order a copy of The Art of Eating, number 78, 2008, from www.artofeating.com. This food quarterly, published in Vermont, is one of the best around.