Posted by Elizabeth Boleman-Herring on February 28, 2022 |

“The last time I saw Dr. James P. Derbin  (whom I knew as Phil), I was a child, and he was my best buddy. In the slides, there we are, clowning at Knossos: I am eleven; he is 27. My father (a lay analyst and Fulbright professor), one of Phil’s mentors-in-passing, shot the pictures of us all on his own father’s 1949 Nikon. An only child, I had no playmates, and moonily missed the United States. Our sojourn in Greece, which lasted some three years, for me represented a forced sabbatical from the anticipated rituals of an American adolescence. I was too young for love and too old for pretend. Then appeared Phil.”—Elizabeth Boleman-Herring 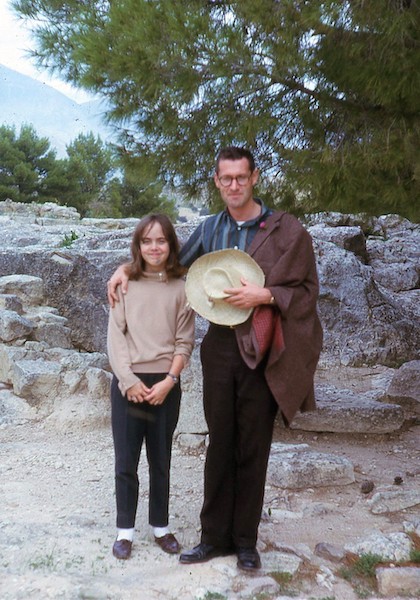 “[E]verything happens only a certain number of times, and a very small number really. How many more times will you remember a certain afternoon of your childhood, some afternoon that is so deeply a part of your being that you can’t even conceive of your life without it? Perhaps four or five times more, perhaps not even that. How many more times will you watch the full moon rise? Perhaps twenty. And yet it all seems limitless.”—Paul Bowles, The Sheltering Sky

PENDLETON South Carolina—(Weekly Hubris)—1 March 2022—Over the years, I’d struck out on Google many times, but I persisted. Finally, this winter, I ferreted out a phone number and office address for him in San Francisco. If you call this number, you will still get a message—“The person you are trying to reach is not accepting calls at this time”—which, while true, is enormously misleading. The person I am trying to reach is very much not accepting calls, going forward: the person I am trying to reach died in 2013.

I often forget that I am 70, and suspect that I am not alone in this hard-wired wishful thinking. The “person” who gazes out from my eyes remains, to my mind, middle-aged, say 45 or 50. I reached maturity, it seems, and my “self” assumed its (largely) final form, but now I inhabit an edifice that is crumbling around that self—crumbling gently but steadily. (To the 45/50-year-old who resides, willy-nilly, within the edifice, the crumbling comes as a surprise, amazingly! Just wait, Young Reader, just wait!)

Another surprise? At 45, at 50, you still have time to seek out old friends to tell them what they meant to you: at 70, that ship has largely sailed.

(L) Phil, Marina Johnson, who worked at the US Embassy in Athens, and I, at Knossos; (R) My mother, Beth Herring, and I. (Photos: F. Jack Herring.)

The last time I saw Dr. James P. Derbin, whom I knew as “Phil,” I was a child, and he was my best buddy. In the slides, there we are, clowning at Knossos: I am eleven; he is 27. My father (a lay analyst and Fulbright professor), one of Phil’s mentors-in-passing, shot the pictures of us all on his own father’s 1949 Nikon. An only child, I had no playmates, and moonily missed the United States. Our sojourn in Greece, which lasted some three years, for me represented a forced sabbatical from the anticipated rituals of an American adolescence. I was too young for love and too old for pretend. Then appeared Phil.

Phil, too, was at loose ends emotionally in Greece. A stranger (in uniform) in a strange place, he seemed as adrift as I. But he was immensely kind and attentive to a little girl outgrowing the shoes she’d brought from Los Angeles. Phil scored 45s (“The Monster Mash,” “Liberty Valence,” “Crying in the Rain”) and cool, 60s-era gear for me from the PX in Athens; then wrote me funny letters after he returned stateside.

Gawky, shy, brilliant, and funny, he kept me company on many of my parents’ research trips into the Greek hinterlands. When he left—before we did—he kept the lines open: through the late 60s, through college, I was comforted by the fact that he was “out there,” on the other coast.

I suspect that my parents and I filled a gap for Phil as well: only from his obituary have I learned that he came from a large and loving family in California . . . and that he returned to find his footing and live out a beautiful, long, and productive life in San Francisco. I also learned, coincidentally, that we shared a birth date.

(L) Phil, being bashful; (R) My father, in a typical pose atop a pedestal. (Photos: F. Jack Herring and Elizabeth Boleman-Herring.)

I quote from the “San Francisco Chronicle,” 26/28 July 2013: “Phil was born on September 13, 1934 in San Bernardino and passed away on July 17, 2013 in San Francisco surrounded by his loving family after a courageous battle with cancer. He will forever be missed by his wife and best friend, Judy Giampaoli; his loving daughter, Kelly Derbin, MD, her husband Russ McHugh; his loving son James Derbin and his wife Monica Lal and adored granddaughters, Cora and Lydia; sisters Barbara Reitz and June Craig, nephew Jason Reitz and his wife Arsha, daughters Jessie and Ellie; extended family and numerous friends.”

“Phil spent his youth in Southern California, graduating from Loyola University, and completed his medical training at Marquette University in Milwaukee, Wisconsin in 1959. Upon completion of his internship at Oregon University School of Medicine, he was commissioned as Captain in the US Air Force and served on Crete, in Greece. Following military service, Phil practiced medicine in Southern California before accepting a psychiatric fellowship at Johns Hopkins University. Upon completion of his fellowship, Phil relocated to the Bay Area, where he built a psychiatry practice and served as clinical director in Community Mental Health for the City of San Francisco. Remarkably, Phil was an actively practicing physician for 53 years.

“Always reaching out to those in need, Dr. Derbin proudly volunteered his time and expertise at St. Luke’s Clinic and the Haight Ashbury Free Clinic in San Francisco for many years.

“Most important to Phil was his abiding love for family and friends, providing care and encouragement as they dealt with life’s challenges and pursued their dreams. Phil’s generosity and kindness defined him—never seeking recognition for the help, good deeds, or the many causes he supported. His gift for finding humor in everyday circumstances brought joy and laughter to our lives that continues on in our shared stories of him. Phil was a lover of books, most especially poetry, politics, and history; a lover of music from Bach to Brubeck; and a lover of San Francisco and the richness of his life here. He marveled at the beauty, diversity, and cultural opportunities that being a resident of San Francisco afforded him. He loved Golden Gate Park, and in his last difficult days, his regular walks at Stow Lake brought him peace and enjoyment.

“In lieu of flowers, please consider making a donation in his name to one of many organizations that Phil held dear and regularly supported: SF Food Bank, Save the Bay Association, or The Brady Center to Prevent Gun Violence.”

Well, there it is, Phil. I can no longer reach you by phone or by mail. It’s too late to tell you I loved you as the big brother I never had and would always need.

But I know now that you have a daughter who also became a doctor, and who practices Family Medicine in San Jose. I spoke with her office manager today. I believe she will be glad to receive the letters you wrote me, the slides of you practicing your father-daughter skills years before her birth, and seeing that lovely, goofy smile I, and then she, loved.

You had a great dad, Kelly. And I’m glad I’ve let you know how I feel before it’s too late. 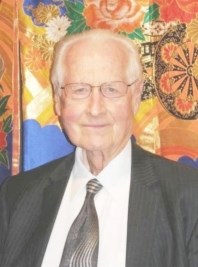