Recipes for Comfort of the Wintry Soul

“Even though I majored in English Literature in college, I was never fond of Ezra Pound’s poetry (or politics). Even though T. S. Eliot dedicated ‘The Waste Land’ to him, calling him il miglior fabbro—the best maker—because of his valuable editing (and playing on the original Greek meaning of the word poietes, maker/creator/poet), to me his work remained impenetrable with its ideograms, obscure references, and lines in Provençal. But there was one poem that tickled me and was perfectly comprehensible despite being in his version of Olde English, his parody of the medieval ditty, ‘Summer is icummen in, Lhude sing Cuckoo.’”—Diana Farr Louis

ATHENS Greece—(Weekly Hubris)—January 2019—Even though I majored in English Literature in college, I was never fond of Ezra Pound’s poetry (or politics). Even though T. S. Eliot dedicated “The Waste Land” to him, calling him il miglior fabbro—the best maker—because of his valuable editing (and playing on the original Greek meaning of the word poietes, maker/creator/poet), to me his work remained impenetrable with its ideograms, obscure references, and lines in Provençal. But there was one poem that tickled me and was perfectly comprehensible despite being in his version of Olde English, his parody of the medieval ditty, “Summer is icummen in, Lhude sing Cuckoo.”

These days in Athens when the sun is stingy, the rain beats down, the temperatures fall (indoors as well as out), it perfectly expresses my sentiments.

But winter is here to stay and, unlike last year, which was mild, it had already provoked chilblains on fingers and toes on us both by early December, something my husband had not suffered since the ghastly winters of 1942-43 during the Occupation. And lest you northerners scoff at our temperatures, which rarely linger in single figures Centigrade, one friend who lives in Anchorage says she has never been colder than during the winters she spent in Greece, where most homes are poorly insulated and poorly heated.

So, how to survive? Besides spending as much time as possible outside walking briskly (it’s so nice and warm when you come in—for a while, at least) or snuggling in a blanket on the sofa with a good book or an Ipad, cooking—the kitchen heats you up—and feasting on comforting foods with a glass of red wine or two always helps improve the mood and the circulation.

With this in mind, I give you here three favorite recipes to take the chill off body and soul.

The first one, a hot artichoke dip, is among the easiest and cheapest dishes I have ever made, and it’s a staple both for parties and for cheering up a dinner for two.

I first tasted it in Rapallo, Italy (where Uncle Ezra lived when released from St. Elizabeth’s mental hospital in DC, where he was committed for being Mussolini’s spokesman during the war). I’d lived there for a year before moving to Greece in 1972 and had the great good fortune to be “reposted” close by in 2004 with a month’s grant to write at the artists’ colony at Bogliasco, a few miles closer to Genoa.

It was Thanksgiving and dear friends from the past had arranged for my husband and me to spend it with an American couple, Louise and Louis Salamone. Of course, we had some good laughs about the prevalence of the name Louis and of course we clicked. But for me that evening, the star of the show was not the turkey cooked to perfection or the usual trimmings, it was the starter, served before we sat at the table, this artichoke dip. I literally could not stop eating it and that’s probably why I don’t remember anything that came after it.

Once back in Greece, I wrote to our hosts asking for the recipe and Louis graciously obliged, as follows:

“So, like, anyway, take a jar of the cheapest artichoke hearts—say 250g—and throw them in a blender or food processor. Add some 3-4 Tbsp of mayonnaise, maybe ½ cup of grated cheese, a finely chopped half-clove of garlic (sounds like little but it becomes a thug in this preparation), and a good pinch of cayenne or some such. Chop it up but keep it coarse. Put into a terrine or a terra cotta pot and bake in a brisk oven until the cheese you’ve sprinkled over it all (and which I neglected to mention till now) has browned. Second time, adjust as you desire.”

Take my word for it, it’s amazing. I could devour the whole pot. (Here in Greece we have terracotta yogurt pots that are perfect receptacles.) You could also heat and brown it in the microwave.

The next recipe, for curried meatloaf, is unique in that it has not only stood the test of time, it is the only recipe that my husband—also known as Joy of the People—has meticulously written out and given me in our 45 years together. 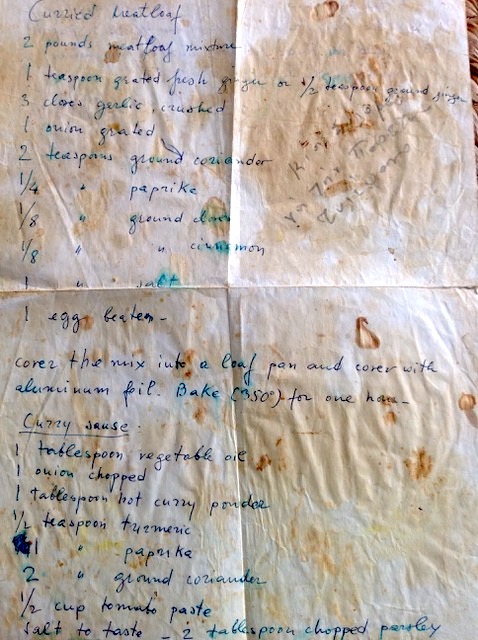 The precious original recipe for curried meatloaf bears the stains of repeated use in the kitchen.

I have saved the original, very stained, faded, and blotched paper, which even has a penciled note from our dear housekeeper, Christina, telling me to ring Kyria Solomou. It is very precious and the only change I would make to the list of ingredients would be to add a tablespoonful of ground cumin to the meat mixture. And instead of paprika, I use Aleppo pepper flakes.

Mix everything together with your hands and shape into a loaf pan. Cover with aluminum foil. Bake at 350ºF for one hour.

1 tbsp vegetable oil—I never use anything but olive oil

Heat the oil and saute the onion until soft. Add the spices and juices from the meatloaf and simmer for 10 minutes until the sauce is thick.

Finally, I unearthed a delicious confection rather than a full dessert. I do not really like cakes and pies, hardly ever make them (apart from the Cretan raisin cake included in last month’s Christmas story) but, like my father, I agree that “a bit of sweet makes the meal complete.” Preferably, in winter at least, that should be a bit or a bite of chocolate.

This recipe is the invention of my husband’s daughter, Chris Louis, who is a marvelous cook and once had a delightful restaurant called Dendrolivano on the island of Spetses. At the time, she sent this, December 26, 2007, she may have been thinking of her own daughter, Silvia, who the year before had taken off for Ecuador with her four-year-old daughter and spent several months volunteering at a commune/plantation in the highlands there. The recipe is reproduced here in Chris’s own words.

“Here’s something I invented this Christmas based on the traditional Ecuadorian combination of chocolate and chilies. Only for the most adventurous gourmets amongst you!

Before you start, make sure you have the following:

Now, to the edibles. You will be needing:

¼ cup of strong black coffee (an espresso will do)

2 fresh chilies, seeds removed and finely chopped (but I am sure dried will do if you don’t have your own growing in a pot on the balcony)

A good handful of roughly chopped walnuts, or more if you like

Cut the chocolate into small pieces and throw into the aforesaid heavy-bottomed pan with the sugar and the coffee. On a slow flame melt gradually, stirring with your wooden spoon until fully blended. Add the butter and chilies and reduce a bit until it’s a thick mass, stirring all the while (about 5 mins). Add the walnuts, give a couple more stirs, and scoop out onto a buttered surface to cool down. When it’s as thick as, say, plasticine, form into small irregular balls so as to resemble real truffles, and dust with the cocoa powder. This is best achieved by pressing the powder through a small sieve.

Refrigerate until ready to serve. YUMMY!” 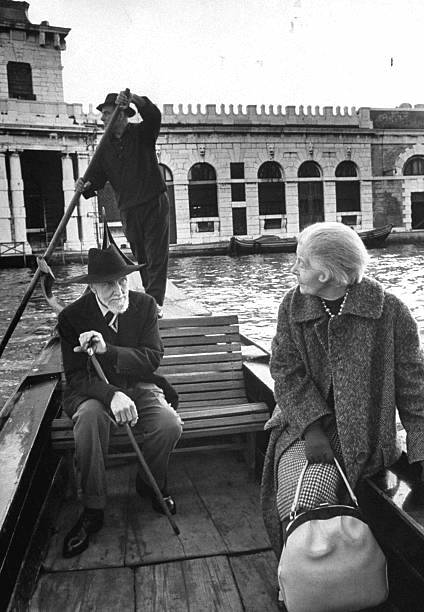 Just writing these down and remembering the jolly times they inspired, I feel warmer already. Thinking about Rapallo also brings back a memorable dinner in March ’72 to which I was invited along with Ezra Pound and his longtime companion, Olga Rudge. Our hosts were Frieda and Bubi Bacigalupo, who had a kind of salon that attracted all kinds of interesting people, famous and not so. Pound was a friend of the family, having played tennis with Bubi in the 30s and chess with their son, Massimo, in the early 60s.

I will never forget his craggy face with shaggy hair and beard, or his silence. His radio broadcasts promoting Il Duce having landed him in trouble, he had apparently vowed not to speak of anything meaningful in public again. Our conversation bounced around as if he were not there, until finally Frieda asked him a direct question: “Ezra, I’m sure you can tell us what determines the date of Easter.”

Whereupon, he replied, “Yes, it always falls on the first Sunday after the first full moon after the vernal equinox.”

And that was all.

But enjoy these dishes and see whether they summon up (or will perhaps create) any memories for you. Kalo Heimona/Happy Winter!

3 Responses to Recipes for Comfort of the Wintry Soul