The Jot’em Down Store, Townville SC

Posted by Elizabeth Boleman-Herring on February 1, 2018 |

“I know I made some small talk then, but the rest is a blur: the pot-bellied stove and the shelves (and shelves and shelves) of pickles and preserves, put up by Mama Boleman in Mason Jars, were gone. And the rockers. The big house had become very much someone else’s home place.”—Elizabeth Boleman-Herring 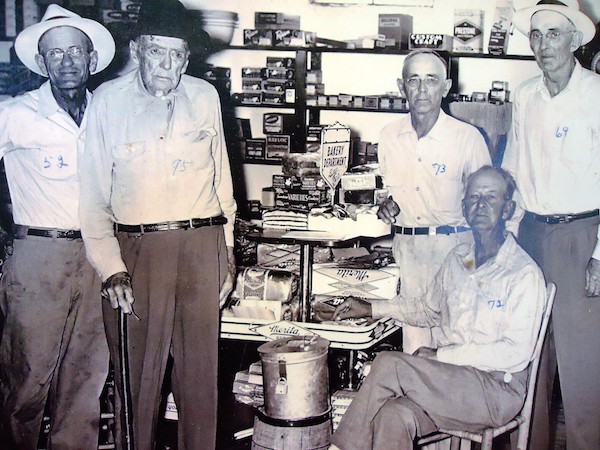 “The past is never dead. It’s not even past.”—William Faulkner, from “Requiem for a Nun”

“South Carolinians are like Chinese: They eat rice, worship their ancestors, and speak in a language that’s hard to understand.”—Variously Attributed

“South Carolina is not a state; it is a cult.”—Pat Conroy

PENDLETON South Carolina—(Weekly Hubris)—February 2018—In the 1970s, following the deaths of my Aunt Willie Sue, my grandfather, and my father, which came like winter rapids, all in the course of a year, my mother and her surviving sister, Inez, sold their old family home place in Upcountry South Carolina.

Neither sister could bear to enter it, so I went in, for 15 minutes, and took out the one thing I could carry: my grandfather’s 19th-century traveling trunk, which was the size of a carry-on bag, made of unvarnished wood, lined with delicately-patterned paper, and full of family papers. At the very bottom of it, I found, were my great-grandfather’s Civil War uniform buttons and a string—literally, a plain string—of Indian trade beads.

On the wall, I didn’t notice Great-grandfather Smith’s framed Civil War commission; it and all else in the place was sold, part and parcel.

The next time I saw the house, in the 1990s, I was back in South Carolina nursing my mother through her final illness. Invited in—these were Southerners, after all, and understood my deep hankering—I walked straight through the front door and down the long central hall, preceded by the owners, but turned on a heel once I reached the modern kitchen, complete with its spotless central island.

I know I made some small talk then, but the rest is a blur: the pot-bellied stove and the shelves (and shelves and shelves) of pickles and preserves, put up by Mama Boleman in Mason Jars, were gone. And the rockers. The big house had become very much someone else’s home place.

If I’d been less blinded by tears, I would have seen that nothing—absolutely nothing else in the place had, indeed, been altered. The woman, bless her, had simply wanted a modern kitchen, and deserved and got one (as my grandmother before her had deserved one, but never got it).

In fact, all those who have lived here, from the 1970s on up until the present, have preserved the charming bones of the place. It is today, as it was c. 1900, a Victorian and Classical Revival farmhouse; a white clapboard monument to privacy (tucked down an allée of pecans, only half still standing) and a showplace for some country carpenter’s haute-gimcrack grace notes.

But the house is a tale for another time. The Sunday afternoon, this past January, that Dean and I drove up in the yard, passing my grandparents’ weathered barn, no one was home but the old dog (named, we found later, “Rocky,” which is what Townvillians once nicknamed my Model-T-Ford-owning grandfather).

Next door to the old Boleman place, but one, was, is, my grandfather Boleman’s tiny general store. Well, “store” is too generous a term for what it was when I visited it in the 1950s, dropping in always after a long flight back east from Pasadena.

In fact, though I know the store was rented out by Bolemans, I feel certain its provenance, from the early 20th century on down, is complicated and, perhaps, gently disputed. Further research will be necessary to parse the relationships of family (Smiths, Shirleys, and Bolemans) to properties in Townville.

Papa called it “The Jot’em Down Store,” and I imagine it operated, during the Depression, as just that: a place where local farmers’ wives went to run a tab for sugar, white bread, lard, and the few other things not produced at home.

It was dominated by a wood stove and, eventually, an electric floor freezer, from which my grandfather would always retrieve for me a push-up orange sherbet ice.

The Jot’em Down Store was the haunt of superannuated farmers and their grandchildren when I knew it. I’m not sure how long the place has been called, legally, McAdams’ Store, as it is today, but the current owner’s family first rented and then bought the place from my grandmother, Abalena, and notes penned in blue cursive, on small sheets of legal paper, attest to McAdams’s once being Townville’s Voting Precinct, among other things.

Cast of Jot’em Down characters.

Looking through the window of the closed shop, I cupped my hands to the glass and saw on the wall a framed Black and White photograph of white-shirted men posed in a field-tired row: third from the right, Papa Boleman, with his broad, high forehead, was unmistakable. I had never before seen this image and,  for the time being, could not get closer to it. In a sense, I had come back, via Florida, New Jersey, and Greece to press my nose up against the glass of a storefront, gazing in at my, and my mother’s, childhoods.

The following day, my husband and I retraced the 15 miles from Pendleton to Townville, circumnavigating a man-made lake not there when I was a child, and found the door open.

The woman behind the counter graciously took down the photo and, removing it from the frame, held it out to me. Simultaneously, we both read the notes which had been on the back, hidden for long decades. I said my grandfather would never forgive me if I took his picture from the store, so I snapped a photo of both image and notes.

Behind the picture, on bits of paper, was the history of McAdamses, the names of the gentlemen pictured, and their ages at the time: my grandfather, standing among his lifelong friends, was 73, just as I remembered him.

12 Responses to The Jot’em Down Store, Townville SC