“If you believe you can overcome the impending collapse of global food production, welcome to Club Naiveté. I, too, used to believe I simply needed to grow and store my own food to insure my continued survival. Upon realizing it was the monetary system driving us to extinction, I exited the monetary system. I lived off-grid for more than a decade, initially in southern, rural New Mexico, and later in western Belize. I later discovered the aerosol masking effect, as described in my earlier essays in this space. There is also the extreme inconvenience associated with unattended nuclear facilities imploding, thus leading to loss of stratospheric ozone and therefore extremely rapid planetary heating. Both of these latter realities indicate, yet again, that we are all connected. Believing otherwise has brought us to the edge of extinction.”—Dr. Guy McPherson 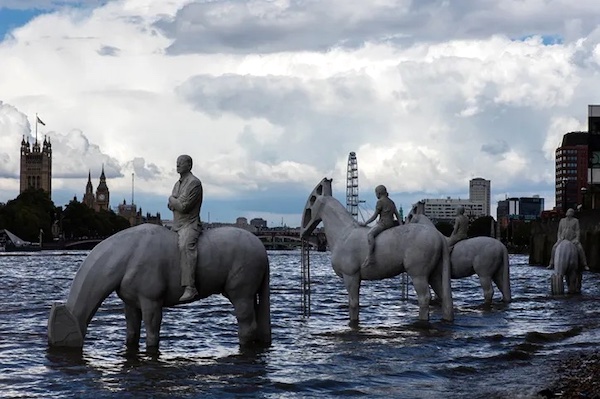 BELLOWS FALLS Vermont—Weekly Hubris)—1 January 2023—My latest essay in this space concluded with a paragraph about hunger: “If you think life without ice on the Arctic Ocean will pose significant challenges for humans, imagine life without food. No ice for your mixed drink is one thing. No food for your plate is quite another.”

If you believe you can overcome the impending collapse of global food production, welcome to Club Naiveté.

I, too, used to believe I simply needed to grow and store my own food to insure my continued survival. Upon realizing it was the monetary system driving us to extinction, I exited the monetary system. I lived off-grid for more than a decade, initially in southern, rural New Mexico, and later in western Belize. I later discovered the aerosol masking effect, as described in my earlier essays in this space (e.g., here). There is also the extreme inconvenience associated with unattended nuclear facilities imploding, thus leading to loss of stratospheric ozone and, therefore, extremely rapid planetary heating (as described briefly here). Both of these latter realities indicate, yet again, that we are all connected. Believing otherwise has brought us to the edge of extinction.

Fortunately, few people followed my lead in opting out of the monetary system. Had a host of likeminded others followed my lead, I have no doubt loss of aerosol masking would have spelled our demise long before now.

From the peer-reviewed Journal of Industrial Ecology on 3 November 2020 comes an update to the renowned Limits to Growth. The original version of Limits to Growth was famously published by the Club of Rome in 1972. Subsequent updates were written by Dennis Meadows and colleagues, as indicated in the References section of the latest update, written by Gaya Herrington. Figure 1 of the latter publication indicates that business-as-usual, the path we are currently following, leads to the rapid reduction of global food production in 2028.

If you need more evidence that we are all inextricably connected, consider the new strain of bird flu threatening wildlife in North America. According to University of Georgia research scientist Rebecca Poulson, who has studied bird flus for 15 years, “We are in the midst of a completely unprecedented wildlife disease outbreak in North America. We’ve never seen anything like this.” According to the UK National Health Service, bird flu can, in rare cases, spread to humans. 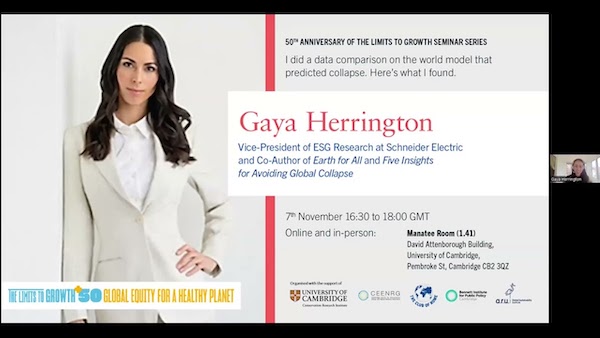 Gaya Herrington: “Humanity is on a path to having limits to growth imposed on itself rather than consciously choosing its own.”

The peer-reviewed contribution from Gaya Herrington supports my long-time prediction regarding near-term human extinction. However, subsequent information published nearly two years after Herrington’s paper provides additional, direr support. Specifically, a blog post by Michael Snyder at The Economic Collapse blog indicates the collapse of global food production lies not in the near future of 2028. Rather, it’s happening now. I rarely use blog posts to support my evidence-rich work, in part because the peer-reviewed literature is conservative. As a scientist, I tend toward conservatism with respect to accepting and promulgating information. However, the essay at the Economic Collapse blog is well-supported with links that indicate collapse of the global food supply is already underway. In quoting Snyder, I rely upon the primary sources he uses to conclude that, “the food that isn’t being grown in 2022 won’t be on our store shelves in 2023. We are facing an absolutely unprecedented worldwide food crisis next year.” (Snyder might well be an unreliable source. Assuming he is, I turn to the sources he uses instead of relying upon Snyder’s interpretation.)

Consider the first of 33 points in Snyder’s essay, the near-term collapse of global food production as reported by MSN: “The hard red winter wheat crop in the United States this year ‘was the smallest since 1963.’ But in 1963, there were only 182 million people living in this nation. Today, our [USA] population has grown to 329 million.” The embedded link referencing 1963 leads to a 5 September 2022 article in the Washington Post. Reduced productivity of rice, corn, and many other food items throughout the world are bolstered with a report from the United Nations containing a quote from United Nations Secretary General António Guterres on 18 July 2022: “We face a real risk of multiple famines this year [2022]. And next year could be even worse.”

The ability to grow, store, and distribute grains at a large scale has defined each civilization, including the current one. The inability to grow, store, and distribute grains such as rice and corn has led to the collapse of previous civilizations. Will the impending disasters in food production cause the collapse of the current version of civilization, and therefore the extinction of all life on Earth? As much as I’d like to believe otherwise, a dose of rationality indicates the worst-case situation is on the horizon.

It’s not only Snyder pointing out the terrors we face in the near future. The general manager of the Central Arizona Project has said we have less than two years to avoid “dead pools” in the nation’s largest reservoirs. A regional effort has already failed, and the federal government is now stepping in to ensure that the metropolitan areas of Phoenix, Tucson, and Las Vegas will have potable water and hydroelectric power for their citizens. Whereas I appreciate the effort, the history of national efforts to overcome massive events such as megadroughts, pandemics, hurricanes, and tornadoes is not encouraging.

As if the immediate shortage of food and water are not problematic enough, an insect apocalypse has gripped the world for several years, as reported in the peer-reviewed Biological Conservation in April 2019. Subsequent peer-reviewed confirmation for this idea came from the 30 October 2019 issue of Nature. Invertebrate organisms pollinate much of the food we eat, and they also decompose plant material into soil, thereby creating soil. They aerate existing soil and spread seeds from mature plants into other locations. Unfortunately, heat waves are destroying pollen even before invertebrates can get to it, according to Yale University’s School of the Environment. In total, invertebrates are estimated to be worth trillions of dollars each year by the American Museum of Natural History.

Note regarding the image that opens this essay: Emily Gosling writes in “It’s Nice That”: “Sculptures of the Four Horsemen of the Apocalypse have been placed in London’s Thames River, but are visible only twice a day at low tide. The pieces were installed by sculptor Jason deCaires Taylor, who created the underwater sculpture park in Cancun, Mexico, in 2009. Entitled The Rising Tide, the London work is sited near Vauxhall Bridge and aims to tackle issues of climate change. Four life-sized horses with riders are shown, though horse heads have been replaced with oil pumps to reference pollution and destruction from fossil fuels. The work was commissioned as part of the Totally Thames Festival, which takes place at various London venues.”