Love in the Time of the Sixth Mass Extinction 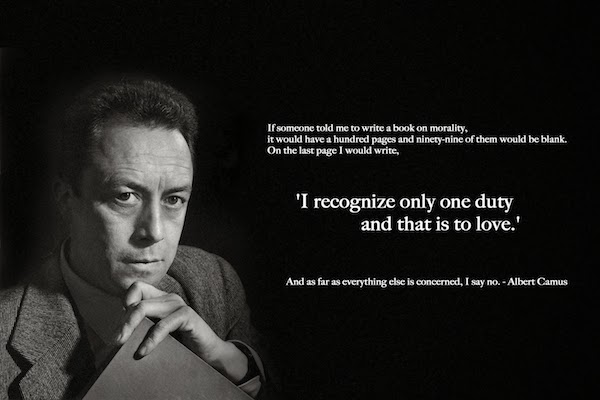 “It is the failing of a certain literature to believe that life is tragic because it is wretched. Life can be magnificent and overwhelming—that is its whole tragedy. Without beauty, love, or danger, it would be almost easy to live. And M. Sartre’s hero does not perhaps give us the real meaning of his anguish when he insists on those aspects of man he finds repugnant, instead of basing his reasons for despair on certain of man’s signs of greatness. The realization that life is absurd cannot be an end, but only a beginning.This is a truth nearly all great minds have taken as their starting point. It is not this discovery that is interesting, but the consequences and rules of action drawn from it.”—Albert Camus, from review of Nausea, by Jean-Paul Sartre, published in the newspaper “Alger Républicain” (20 October 1938).

MAITLAND Florida—(Weekly Hubris)—January 2020—We are in the midst of abrupt, irreversible climate change. We are in the midst of a Mass Extinction Event on Earth. How shall we act? What moral code(s) can guide us? These two questions form the basis for my ongoing work, which I occasionally refer to as Planetary Hospice.

I have written periodically about philosophy in this space, albeit generally in passing. Last month provided an obvious example of my long-time interest in philosophy, albeit overtly rather than with the casual approach I customarily employ. In that essay, I pointed out my tendency to think of philosophy in much the same way that I think about science and art, as a personal endeavor. I have further hinted at my own personal philosophy in my earlier essays in this space, while also acknowledging the views of those who have influenced me.

Lacking formal education in philosophy, I became fascinated with the discipline during my tenure as a university professor. In this position, I was paid to think. The “life of the mind” known as academia led me to ponder my place in the universe, a practice I encourage others to pursue, regardless of their vocations.

Because of my philosophical tendencies, I am occasionally asked to put myself into a category: What kind of philosopher am I? As with most people, I resist placing myself into the proverbial box, regardless of the topic. In this case, before reluctantly relenting, I offer the definition of philosophy.

Philosophy is derived from the Greek roots philo, which means love, and sophos, which means wisdom. That philosophy literally means love of wisdom is not lost on me. I suspect it was not lost on my university students, either. That the idea and application of love remain critically important to my ongoing focus on abrupt climate change leading to near-term human extinction is hardly a coincidence.

Inspired by French-Algerian writer Albert Camus, and especially inspired by the absurdism often associated with Camus, I readily admit that I lean toward the absurd. Consider this passage from Camus’s The Myth of Sisyphus and Other Essays:

Weariness comes at the end of the acts of a mechanical life, but at the same time it inaugurates the impulse of consciousness. It awakens consciousness and provokes what follows. What follows is the gradual return into the chain or it is the definitive awakening. At the end of the awakening comes, in time, the consequence: suicide or recovery. In itself weariness has something sickening about it. Here, I must conclude that it is good. For everything begins with consciousness and nothing is worth anything except through it.

What is absurdism? From a philosophical perspective, absurdism posits that the universe is irrational and meaningless and that the search for order brings the individual into conflict with the universe. In other words, the universe contains no inherent logic, meaning, or purpose for individuals. Any quest for meaning or order is inherently personal in nature. Indeed, such searches place the seeker into conflict with a universe that is demonstrably indifferent.

As with Camus, I am reluctant to put myself and my ideas into a category. As with Camus, most informed readers likely would categorize me as an Existentialist. After all, Existentialism acknowledges the darkly humorous “nothingness” of humanity: from the cosmic perspectives of space and time, we are trivial. Consider what is probably the most-quoted of Camus’ lines: “The only way to deal with an unfree world is to become so absolutely free that your very existence is an act of rebellion.”

Existentialism is not fatalism, although the two categories often intersect. For example, as with every rational person, I am a fatalist, as I pointed out via video about two years ago. The Existentialist perspective is simultaneously underlain by absurdity and integrity: The lucid acknowledgement of the meaninglessness of existence leads to absurdity, whereas integrity results from the insistence upon continuing to act compassionately and thoughtfully in the face of the void. In his 1947 novel, The Plague, Camus writes:

I’ve seen of enough of people who die for an idea. I don’t believe in heroism; I know it’s easy and I’ve learned it can be murderous. What interests me is living and dying for what one loves.

I sometimes refer to Eastern philosophies such as Buddhism and Hinduism in calling this approach right action without attachment to the outcome. In pursuit of continued right action, I left behind a privileged life on the campus of a major research university nearly eleven years ago. Specifically, I naïvely attempted to lead society away from abrupt, irreversible climate change and the Sixth Mass Extinction. My error was revealed too late for me to change course. The teacher within me switched from campus classrooms and ecologically oriented field trips to any venue open to my message. My increased knowledge of individuals and society led to an expansion of my own scholarship. As an example, my recent peer-reviewed work appears in Clinical Psychology Forum, in contrast to my earlier work, which appeared in publications such as Ecology and Conservation Biology.

When I was spending most of my time on campus, my personal philosophy extended to my teaching in classrooms and my mentoring efforts in coffee shops and on field trips. My passion for teaching overlapped with my personal philosophy in ways rewarding for me and my students. As I frequently pointed out, we are more than the work for which we are paid. To illustrate this idea, I required students in my science-rich courses to complete a significant piece of art or literature as a major component of their grades. The initial, virtually uniform distaste for such activities by students ultimately turned into understanding of the importance of such pursuits as they, too, recognized the importance of a well-rounded existence. This pursuit of a holistic outlook contributed to the development, for me and my students, of eclectic lives filled with purpose.

I never could have predicted the person I would become. For all the imperfections I read about me, I am satisfied with the results to date. May your journey lead to a similar outcome.

Have I made mistakes? Yes, of course, and a line from Nietzsche comes to mind as I continue to focus on maintaining my integrity: “The individual has always had to struggle to keep from being overwhelmed by the herd … But no price is too high to pay for the privilege of owning yourself.”

Have I achieved contentment? Today is as good a day to die as any other, although I would rather have many more years. With these notions in mind, I will attempt to live fully and with gratitude on each additional day.

Guy McPherson is an internationally recognized speaker, award-winning scientist, and one of the world’s leading authorities on abrupt climate change leading to near-term human extinction. He is professor emeritus at the University of Arizona, where he taught and conducted research for 20 years. His published works include 14 books and hundreds of scholarly articles. Dr. McPherson has been featured on television and radio and in several documentary films. He is a blogger and social critic who co-host his own radio show, “Nature Bats Last.” Dr. McPherson speaks to general audiences across the globe, and to scientists, students, educators, and not-for-profit and business leaders who seek their best available options when confronting Earth’s cataclysmic changes.
View all posts by Guy McPherson →
This entry was posted in Uncategorized. Bookmark the permalink. Follow any comments here with the RSS feed for this post. Post a comment or leave a trackback: Trackback URL.